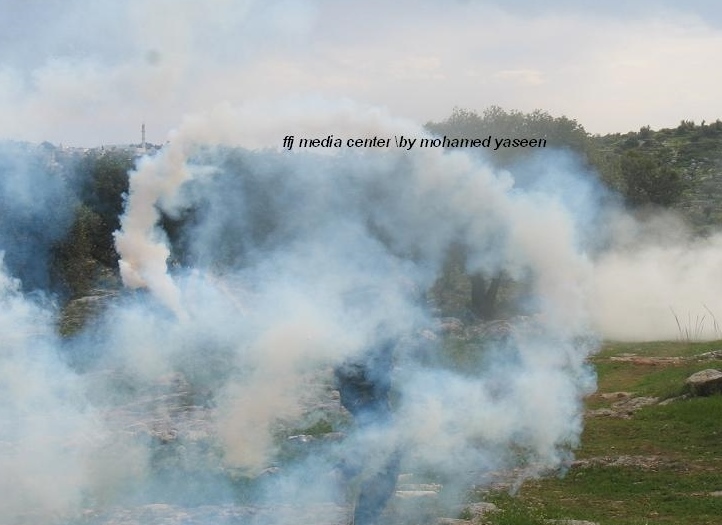 Friday January 22 2013; Israeli soldiers attacked the weekly nonviolent protest against the Wall and settlement, and shot one child in the head, while dozens of protesters have been treated for the effects of teargas inhalation.This week’s protest was held in solidarity with Palestinian detainees held by Israel, especially the detainees who are holding open-ended hunger strikes demanding an end to their illegal imprisonment by Israel, the Friends of Freedom and Justice Committee in Bil’in village, near the central West Bank city of Ramallah, reported that

The Committee said that dozens of Palestinians, Israeli and international peace activists participated in the protest that started after Friday prayers from the center of the village, and headed towards the wall.

“The participants raised Palestinian flags and chanted slogans calling for resisting the Israeli occupation, the demolition of the apartheid wall and they also called on Palestinians and the free world for a real solidarity with prisoners in order to liberate them”, the Committee reported.

After arriving at the Abu Lemon area, adjacent to the Annexation Wall, the army, stationed behind the wall, started firing teargas bombs, concussion grenades, and rubber-coated metal bullets at the nonviolent protesters.

One child was shot in the head, while dozens of protesters suffered the effects of teargas inhalation; all were treated by field medics at the scene.

Later on, clashes erupted between the soldiers and local youths who hurled stones at them, and lasted for several hours.

The Committee said that this week’s protest comes in in solidarity with all detainees, especially detainee Samer Al-Eesawy, who has been on hunger strike for 214 days, and detainees Tareq Qa’dan, Ja’far Ez Ed-Deen, and Yousef Sha’baan.

The detainees are demanding their release as they are been illegally detained by Israel, and an end to the ongoing Israeli violations and attacks against them, and against their visiting family members.

Also on Friday, Israeli soldiers attacked the weekly nonviolent protest against the Annexation Wall and settlements, in Nabi Saleh village, near the central West bank city of Ramallah, leading to several injuries among the protesters, and kidnapped a 13-year old child after wounding him in the leg.

The child, identified as Waseem Mohammad Sahran, 13, was shot in the back by a rubber-coated metal bullet fired by the army, and was kidnapped by the soldiers who took him to a military tower installed near the village. He was released later on, and was moved by Palestinian medics to a Yasser Arafat Hospital in the central West Bank city of Salfit.

As the protesters marched towards Palestinian lands illegally seized by Israel for the construction of the Wall and the illegal settlements, the army fired dozens of gas bombs and rubber-coated metal bullets, and sprayed the protesters with wastewater mixed with chemicals. Army also fired gas bombs at a number of nearby homes.

One youth, identified as Mahmoud Tamimi, 19, and a 45-year old woman, identified as Halima Tamimi, were shot by rubber-coated metal bullets in their feet.

In related news, several Palestinian nonviolent protesters have been injured in Al-Ma’sara village, near the West Bank city of Bethlehem, after the army attacked the weekly nonviolent protest against the Wall and settlements.

Furthermore, the army attacked nonviolent weekly protests against the Wall and settlements in Ni’lin village, near Ramallah, in Kufur Qaddoum, near Qalqilia, and in Hebron. At least 15 protesters, including journalists, have been injured.