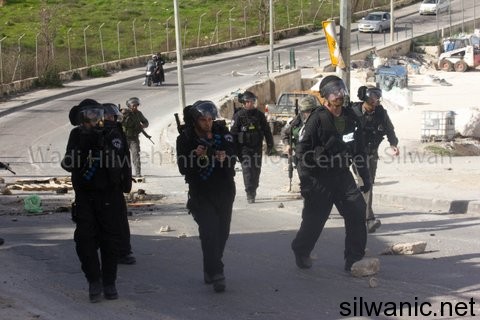 Friday evening – February 22 2013; Israeli soldiers and undercover units invaded Al-Isawiyya town, in occupied East Jerusalem, and kidnapped five Palestinians before taking them to an unknown destination. Cashes have been reported between the invading soldiers and local youths.Local sources reported that undercover soldiers of the army infiltrated into the town from its main entrance, using a civilian vehicle, and kidnapped five Palestinian youths.

The soldiers then fired several concussion grenades in addition to some rounds of round ammunition; no injuries were reported.

The Wadi Hilweh Information Center in Silwan, in occupied Jerusalem, reported that the kidnapped residents are 12-30 years old. They have been identified as Wadee’ Obeid, Mohammad Dirbas, Mohammad Assouly, Khaldoun Dari, and Mohammad Halayqa.

The army also removed the protest tent that is installed in the center in the town, and the residents started reinstalling it as soon as the army left the area.

Also on Friday, the army and the Police kidnaped five Palestinians in the yards of the Al-Aqsa Mosque in Jerusalem and wounded at least 10 others. One of the kidnapped residents it a cameraman identified as Jamil Al-Qadamany.

The Wadi Hilweh Information Center reported that ten Palestinian have been injured including an eight-year-old child who was shot by a rubber-coated metal bullet in her abdomen. A local medic, identified as Samer Al-Wa’ry, was also injured.

Eyewitnesses reported that the army, and members of the undercover forces, invaded the Al-Aqsa mosque from the Al-Magharba Gate, and fired several gas bombs and rubber-coated metal bullets.

Several worshipers, including elderly, have been treated for the effects of teargas inhalation.