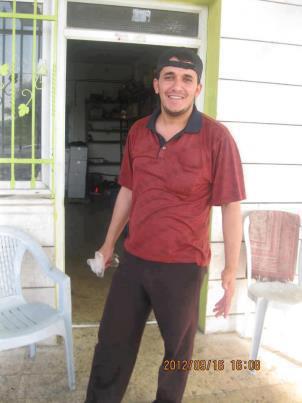 Saturday February 23, 2013; Palestinian Ministry of Detainees, Issa Qaraqe’, stated that a Palestinian detainee held under interrogation at an Israeli detention and interrogation facility, died Saturday after being tortured and subjected to harsh conditions. The detainee has been identified as, Arafat Shahin Jaradat, 33, from Sa’ir town, near Hebron city in the southern part of the occupied West Bank.

Qaraqe’ stated that a lawyer working for the Ministry Of Detainees visited Jaradat two days ago, and Jaradat complained that he was subject to torture and very harsh detention conditions leading to several health complications.

Jaradat was then moved to the Majiddo Israeli prison where he was interrogated again and subject to the same torture and abuse. Some Israeli sources claimed that the detainee suffered a heart attack and died instantly.

Qaraqe’ held Israel responsible for the death of Jaradat, and called on human rights groups to intervene and act on revealing all incidents that led to Jaradat’s death.

Jaradat was taken prison a week ago, and was subject to harsh interrogation and torture since then, the Palestinian Prisoners Society (PPS) reported.

Jaradat is married and a father of two children. Palestinian detainees held by Israel sad that they will hold a hunger strike Sunday in protest to the death of Jaradat and the ongoing Israeli violations against the detainees.

On January 21, the PPS reported that a former Palestinian political prisoner from Hebron, died at a hospital in Jerusalem after falling into a coma 50 days ago due to a serious health condition resulting from his imprisonment by Israel, and the lack of medical treated while in prison.

The PPS said that Ashraf Abu Thra’, 27, from Beit Awwa village, west of the southern West Bank city of Jenin, was hospitalized at the Augusta Victoria hospital in Jerusalem where he fell into a 50-day coma until his death.

79 detainees have died in prison since the beginning of the Al-Aqsa Intifada (In late September 2000) due to torture, medical neglect, excessive use of force by the soldiers and interrogators, in addition to several detainees who were executed by the arresting officers, former Political Prisoner, Palestinian Researcher, former political prisoner, Abdul-Nasser Farawna said.

More than 202 detainees died or were killed in Israeli prisons since 1967; dozens of detainees also died after they were released due to diseases they encountered in prison or due to complications resulting from extreme torture and bad conditions in prisons.

Soldiers Abduct a Palestinian Near Jenin