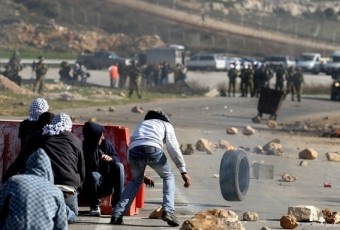 Saturday February 23, 2013; Palestinian medical sources reported that two Palestinians have been injured by rounds of live ammunition fired by Israeli soldiers invading Qasra village, south of the northern West Bank city of Nablus, the Palestine News Network (PNN) has reported.Mohammad Al-Wadi, an activist of the Popular Committee against the Wall, stated that one of the residents was shot in the foot while the other was shot in his abdomen.

Eyewitnesses reported that the settlers cut several trees in an orchard that belongs to a resident identified as Jabali Abu Reeda.

The settlers also surrounded two homes that belong to residents Tawfiq Abdul-Majid, and Abed Tawfiq, leading to further clashes between the settlers and the residents.

The settlers repeatedly invade Qasra and nearby villages, and recently invaded the village and burnt six cars that belong to local residents.
In related news, four Palestinians have been injured, two seriously, by Israeli soldiers’ fire invaded the village of Aboud, north of the central West Bank city of Ramallah.