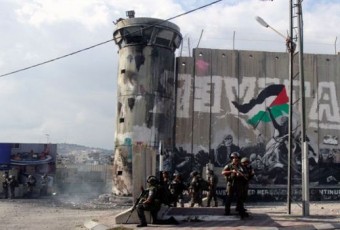 Monday February 25, 2013, Palestinian medical sources reported that a Palestinian child was seriously injured by Israeli military fire during clashes that took place near the Aida Refugee Camp, north of the West Bank city of Bethlehem. At least 10 Palestinians have been injured during clashes that took place in Ramallah.Clashes took place after Israeli soldiers tried to invade the Aida refugee camp in Bethlehem, and the soldiers fired rounds of live ammunition, gas bombs and rubber-coated metal bullets.

Eyewitnesses told the Palestine News Network (PNN) that two live rounds hit the child, 13 years old, in the back apparently fired by a silenced gun as no gunshot sounds were heard.

The child was moved to the government hospital in Bethlehem, and his injury has been described as serious. Another Palestinian youth was shot by rubber-coated metal bullets.

Also in Bethlehem, clashes took place in Tequa’ village, east of the city, as the army used excessive force to disperse Palestinians protesting the death of detainee Arafat Jaradat, who died at an Israeli interrogation facility on Saturday due to extreme torture.

Mohammad Al-Badan, head of the Youth Council in Tequa’, told the Radio Bethlehem 2000 that a Palestinian child was shot by a rubber-coated metal bullet in the foot, while several were for the effects of teargas inhalation.

Similar clashes took place close to the Ofer Israeli prison, near of the Central West Bank city of Ramallah, and 10 Palestinians have been injured by Israeli army fire.

Medical sources at the Palestine Medical Center in the city reported eight of the wounded were shot by live rounds and rubber-coated metal bullets, while one resident was hit in the head by a gas bomb fired by the army, and a 24-year-olld woman was treated for the effects of teargas inhalation.