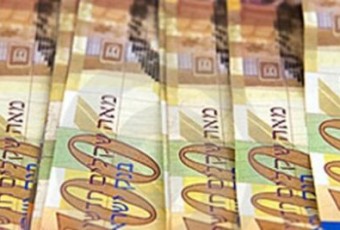 Israeli media sources reported Monday that Israel has officially transferred 350 Million New Israeli Shekels (NIS) to the Palestinians Authority. The money is Palestinian Tax money Israel collects on border terminal on behalf of P.A. in the West Bank.The sources said that the decision to transfer the money was made by Israeli Prime Minister, Benjamin Netanyahu.

The amount is the total amount transferred to the P.A. after Israel deducted 77 M. NIS as part of Palestinian debts owed to the Israeli regional power and water companies.

Israel collects Palestinian Tax money of border terminals as the P.A. does not control, or even have any presence, on borders in the occupied West Bank.

Meanwhile, a senior official at the Palestinian Finance Ministry reported that the money Israel collects on behalf of P.A is approximately 500 Million a month, and that Israel charges the P.A. a %3 interest.

The official added that Israel usually deducts around 100 Million a month without consulting the P.A.

He further stated that part of the money Israel deducts goes for bills, including medical treatment of Palestinians transferred to Israeli hospitals, in addition to compensation cases ruled by Israeli courts against the Palestinians.