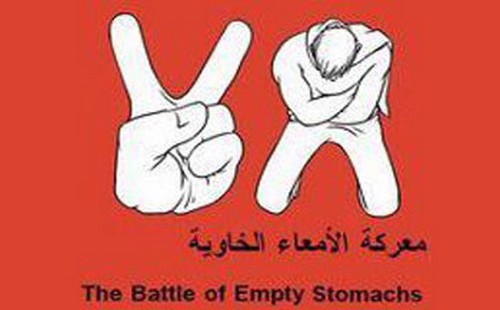 Occupied Ramallah, 26 February 2013 – Addameer Prisoners’ Support and Human Rights Organization’s Documentation Unit confirmed that the number of prisoners on hunger strike in the Occupation’s jails has increased to twelve.Detainee Ayman Sharawna (36 years old) from Dura Al Khalil: Sharawna started his hunger strike on 1 July 2012 in protest of his re-arrest under Article 186 of Military Order 1651.

This law allows a special military commission to effectively “cancel the early release” of prisoners who were released in the prisoners exchange deal. In Sharwana’s case, this means that he can be sentenced to serve the remaining 28 years of his sentence.

He is currently in isolation in Ayalon Prison in Beer al-Saba’, and is subjected to harsh and degrading treatment by the IPS and the special forces.

On 20 February 2013, the Israeli Supreme Court considered an appeal in Sharawna’s name regarding Article 186 of Military Order 1651. The court decided to return the case to the Military Commission to make a decision, before it can be raised again in the Supreme Court.

He has been on hunger strike for over 200 days in protest of his arbitrary re-arrest. Isawiis a recently released ex-prisoner who was released in the latest prisoner exchange deal on 18 October 2011.

He suffers from a severe decrease in weight as his weight hovers around 45 kilograms, a 23 kg decrease since his arrest. Isawiis not strong enough to move on his own and has to use a wheelchair. He recently escalated his hunger strike and stopped drinking water.

On 21 February 2013, the Israeli Magistrate Court sentenced Isawito eight months as of the day of his arrest, on the grounds that he violated a military order by entering the West Bank.

This ruling is in addition to a forthcoming sentencing by the Military Commission under Article 186 of Military Order 1651 which will consider if Isawiwill be sentenced to complete his previous sentence of 20 years.

On 24 February 2013, they were transferred from Ramleh Prison Clinic to Asaf Harove Hospital as their health condition seriously deteriorated due to their refusal to drink water.

They were scheduled to have hearings today in Ofer Military Court to confirm their renewed administrative detention orders for an addition three months beginning on 22 February 2013.

The court hearing was postponed until tomorrow (27 February 2013) and will be held in the hospital due to their fragile health condition and their inability to move.

Eight detainees announced their joining of the hunger strike. They are:

Qa’adan entered a hunger strike on 20 February 2013 in support of her detained brother, Tarek Qa’adan, who is also on hunger strike.

It is reported that she is currently in isolation as punishment for having joined the hunger strike.

Prisoner Maher Abdellatif Younis, the longest serving Palestinian prisoner in the Occupation’s jails: Younis began his hunger strike on 24 February 2013 and is currently in Gilboa Prison.

He announced his strike with the goal of shedding light on the issue of pre-Oslo prisoners (who currently number 109), and the necessity of their release en masse without appeal.

Younis (54 years old) is from the town of ‘Ara in the “Triangle” region in northern Palestine, and has spent over 30 years behind bars.

He entered an open hunger strike on 20 February 2013 after one day of detention in protest of the issuing of a six-month administrative detention order against him.

He is currently in an isolation cell in Ofer Prison. It is noteworthy that Al-Tawil previously spent a year and a half in prison on the basis of administrative detention orders.

Detainee Samer Al-Barq (38 years old) from Jayyous, Qalqilia: The military prosecuter proceeded to renew an order of administrative detention against him last Sunday 24 February 2013, for a period of three months.

The detainee undertook a number of hunger strikes in the past years and has been administratively detained since July 2010. He currently languishes behind bars in Hadarim Prison.

Addameer Prisoners’ Support and Human Rights Association expresses its concern for the lives of hunger striking prisoners and detainees and maintains that the just solution for the issue of striking prisoners lies in the meeting of their demands and the treatment of all Palestinian detainees in accordance with international humanitarian law, particularly the Third and Fourth Geneva Conventions and other conventions of international human rights law.

Addameer calls on the Arab Republic of Egypt to work seriously on releasing all prisoners freed in the prisoners exchange deal and on forcing the Occupying State to cancel Article 186 of Military Order 1651, which authorizes the detention of freed prisoners.

Addameer condemns the decision of the Israeli Prison Service to forbid lawyers from visiting detainees and prisoners on hunger strike.

Addameer considers this to be the latest installment in a series of abuses faced by the organization and its staff in an attempt to silence their voices and undermine their determination to support the fight for justice and freedom for prisoners, and the end of the occupation.

*Write to the Israeli government, military and legal authorities and demand the release of the prisoners on hunger strike.

*Write to your own elected representatives urging them to pressure Israel to release the hunger strikers.