Five, Including Medic And Journalist, Injured In Bil’in 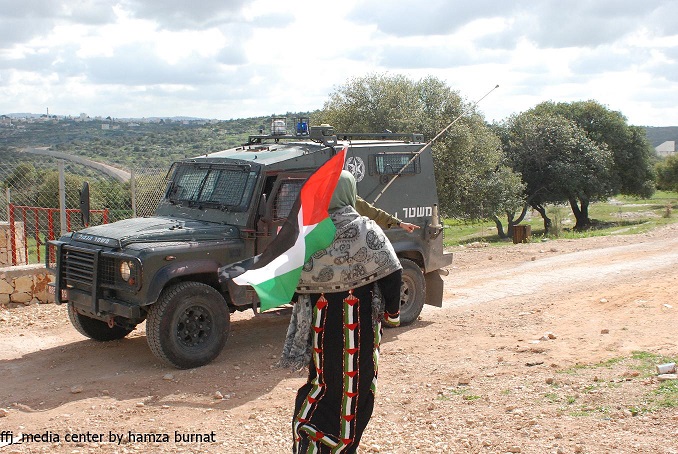 Friday March 1, 2013, Five Palestinians, including a medic and a journalist, have been injured after Israeli soldiers attacked the weekly nonviolent protest against the Wall and Settlements, in Bil’in village, near the central West Bank city of Ramallah.Palestinian Prime Minister, Dr. Salaam Fayyad, was among the wounded. Protests and injuries have been reported in different parts of the occupied West Bank.

Dozens of protesters, including Palestinian Prime Minister, Dr. Salaam Fayyad, who also participated in the nonviolent activity, have been treated for the effects of teargas inhalation.

This week’s protest marked that eight year since the villagers, accompanied Israeli and international peace actvisits, started the weekly nonviolent protests and activities against the illegal Wall and settlements.

The protesters also marched in support of all Palestinian political prisoners, held by Israel, especially those on hunger strike demanding an end to their illegal detention.

They marched chanted for an end to the illegal Israeli occupation of Palestine, the release of all political prisoners held by Israel, the removal of Israeli settlements and the destruction of the Annexation Wall.

As they arrived at the Abu Lemon natural reserve, several persons delivered speeches affirming the Palestinian legitimate rights, and expressing solidarity with all detainees held by Israel, and calling for units among all factions.

The protesters then marched towards the Annexation Wall, and some protesters managed to cut some of the barbed-wire fence, just before the concrete wall, and the soldiers fired gas bombs, rubber-coated metal bullets, and concussion grenades.

The soldiers then chased the protesters leading to clashes that lasted for several hours; thee more Palestinians were injured, and dozens were treated for the effects of teargas inhalation.

Also on Friday, six residents were injured in the nearby al Nabi Saleh, among them two children. Many others were treated for the effects of tear gas inhalation at all three locations, local sources reported.

An anti-wall protests were also organized at Al Ma’sara village near Bethlehem and in Hebron old city, southern West Bank. Israeli soldiers attacked Al Ma’sara villagers and their supporters using rifle butts and batons and forced them back into the village.

While at al Shuhada Street in Hebron old city troops used tear gas and rubber coated steel bullets to attack unarmed protesters. One Palestinian youth was injured in the head and many others suffered effects of tear gas inhalation.

The Al Shuhada Street was closed for Palestinians by the Israeli army 13 years ago to provide so-called security for the illegal Israeli settlements inside the old city of Hebron.