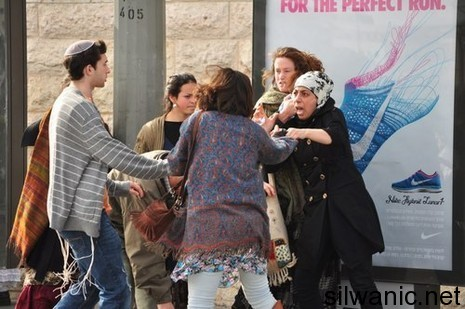 In response to Monday’s attack by a group of Israelis on a Palestinian woman in Jerusalem, Israeli police officer Ariel Shapiro posted on his Facebook page, “Good! It’s a shame the Arab whore didn’t die [in the attack]”.The attack took place as the Palestinian woman waited at a light rail station in Jerusalem. A group of Jewish Israelis approached her and began punching and kicking her, then ripping off her headscarf.

A witness to the assault told the Israeli paper Ma’ariv, “There were about 100 Orthodox and yeshiva students who disembarked the tramway and spotted an Arab woman accompanied by an older man. It developed into arguing and yelling, and I don’t know what the content was that everyone jumped on her.” In addition, according to the witness, an Israeli security officer passively watched the attack and smiled as the attackers tore off the woman’s religious headscarf.

The Facebook posting by the Israeli officer is just the latest in a string of incidents involving Israeli soldiers posting offensive and disturbing content on social media. Just a week earlier, a photo posted by an Israeli soldier showing a Palestinian child in the crosshairs of a sniper rifle went viral on the internet – but the officer was not charged for posting it.

According to a recent study by the Israeli human rights group Yesh Din found that out of 103 investigations opened in 2012 into alleged offenses committed by Israeli soldiers in the occupied territories against Palestinians and their property, not a single one has so far resulted in any charges.

Former Israeli soldiers with ‘Breaking the Silence’ have described the ‘culture of impunity’ among Israeli soldiers, in which brutality is rewarded and extreme acts of violence go unpunished.

Many more of the disturbing photos posted in recent years by Israeli soldiers as ‘trophies’ on their Facebook pages can be seen at the link below. They include an eight-year old girl with blood all over her face after she was hit by a rubber-coated steel bullet while on the roof of her house, and instead of calling an ambulance, Israeli soldiers decided to detain her and her mother. Another well-publicized photo shows a dead Palestinian boy with blood all over his chest laid out in a position of ‘crucifixion’.