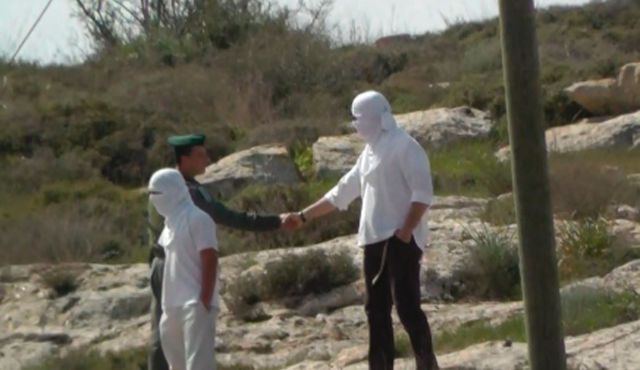 On Saturday, masked Israeli settlers were caught on camera shaking hands with Israeli border guards stationed in the village of Umm al-Amad, south of Hebron, then proceeded to harass a group of Palestinian cattle herders while the border guards stood by and watched without intervening.A spokesperson for the border guard told Israeli newspaper Haaretz, “Border Police officers seek to enforce law and order in a manner that treats all sides equally. Such dialogue, which incorporates both sides without bias, should not be seen as an attempt to take sides.” However, the pictures of the incident, and eyewitnesses who were present, confirm that the guards clearly took the side of the Israeli settlers in this incident.

At no point did the Israeli border guards attempt to intervene and stop the attacks, according to eyewitnesses. The guards and settlers appeared to be acting in concert to deny the Palestinians access to their lands.

According to the cattle herders, this is a frequent occurrence in the village, since the Israeli settlement of Otniel was built on land stolen from the village. The settlers frequently attack farmers and herders, and the Israeli military allows the attacks to take place, as well as assisting the settlers in their harassment of the Palestinians.

The group ‘Breaking the Silence’, made up of former Israeli soldiers, has presented testimony from many former soldiers documenting this type of collusion between Israeli soldiers and settlers, particularly in the Hebron area.