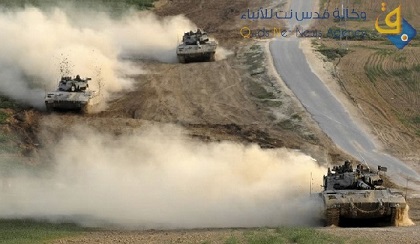 Monday Morning, March 11, 2013, a number of armored Israeli military vehicles carried out a limited invasion into an area east of Juhr Ed-Deek area, southeast of Gaza city.Local sources reported that the army, stationed in a military base near the border, advanced 200 meters into the area, while army bulldozers leveled and uprooted Palestinian farmlands and property.

The army withdrew from the area later on, no clashes or confrontations have been reported.

In related news, Israel decided to allow two trucks filled Gaza-made with wooden furniture to be exported through the Karem Abu Salem (Kerem Shalom) Crossing, in the southern part of the Gaza Strip, in addition to allowing the entry of 350 trucks filled with supplies for trade, agriculture and transportation sectors.

Nineteen of these trucks are loaded with cement, iron, and gravel, and are meant to be used for the implementation of international development projects. Limited amounts of cooking gas have also been allowed into the coastal region.

Despite allowing a few trucks into Gaza, and the Israeli claims of easing the siege, the coastal region is still suffering from the lack, or sharp decrease, of medical supplies, equipment and certain medications.

More than 400 patients, including infants and children died due to the siege. Many patients died while waiting permits from Israel to cross the border for medical treatment.

Also on Monday, Israel allowed 55 persons to leave the Gaza Strip to visit their family members imprisoned by at the Nafha detention camp.