Ashton: “E.U. Committed To Its Own Regulations In Dealing With Israel” 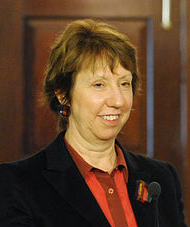 Catherine Ashton, High Representative of the Union for Foreign Affairs and Security Policy, stated that the European Union is committed to the implementation of its policies and regulations in dealing with Israel, and denounced the ongoing Israeli construction and expansion of Jewish settlements in occupied Palestine.Her statements came in response to a letter sent, last December, by Dr. Hanan Ashrawi, former Palestinian negotiator and member of the Executive Committee of the Palestinian Liberation Organization (PLO), demanding the European Union to act against the ongoing Israeli violations of International Law.

Ashton sent a letter to all EU Foreign Ministers affirming the determination of the EU to implement all regulations and laws passed by the EU to increase the chances of a real peace, and stability, in the near future.

As for Israel’s decision to continue its settlement activities following the November 19 2012 General Assembly resolution recognizing Palestine as a nonmember state, Ashton said that the EU asked Israel to respect all international agreements.

“The EU stressed on the importance of Israel’s commitment to International Law, and all signed treaties”, she said, “Israel must also respect the Paris Agreement by transferring all Palestinian tax revenue to the Palestinian Authority so that it can perform its duties”.

She also stated that the current and previous findings and resolutions adopted by the EU push Europe to be actively involved in assuring that Israel implements all agreements signed between the EU and Tel Aviv.
Ashton added that these agreements apply to all of the territories Israel occupied in 1967, including East Jerusalem and the Golan Heights.

The European official also said that the EU wants Palestine to achieve a full state status at the United Nations, as this is part of the activities meant to resolve the ongoing conflict between Israel and the Palestinians.

Ashton said that the EU has been actively involved in rebuilding and strengthening the institutions of the Palestinian Authority, and that the EU will continue its activities until lasting peace is achieved.