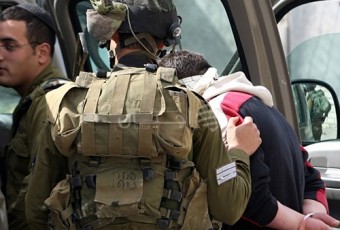 The army also kidnapped two residents identified as Ahmad Hussein Jallad, from Aqaba town near the northern West Bank city of Jenin, and Ahmad Salem ‘Aamoudy, from Borqeen nearby town. They were both kidnapped while working in Israel, local sources reported.
In Jenin city, the soldiers kidnapped Ammar Mahmoud Samara, 23, after invading his home in Al-Hadaf neighborhood.

In Hebron, in the southern part of the West Bank, Israeli soldiers kidnapped a 34-year old woman identified as Naheel Talal Abu Aisha, 34, after breaking into her home in Jabal Abu Romman area in the city.
A Palestinian child, identified as Ehab Abu Al-Halawa, 16, was also kidnapped in Bab Al-Zawiya area, in the center of Hebron city.

In Jerusalem, undercover forces of the Israeli army kidnapped Yazan Siyam, 16, after breaking into his family’s home in Silwan town, south of the Al-Aqsa Mosque. The soldiers also broke into and searched the homes of Siyam’s uncles in the town.

The Wadi Hilweh Information Center in Silwan reported that the army violently attacked several members of Siyam’s family, after the soldiers used ladders to climb onto rooftops of their homes, and broke into them before attacking family members.

The undercover forces violently searched the homes and confiscated some of Yazan’s clothes and belongings.

The soldiers further kidnapped Ibrahim Riziq from the Old City of occupied East Jerusalem, after breaking into his home and searching it, and kidnapped ‘Adel Najeeb, and Eyad Ash-Shalabi from the As-Suwwana neighborhood close to the ancient walls of the Old City.