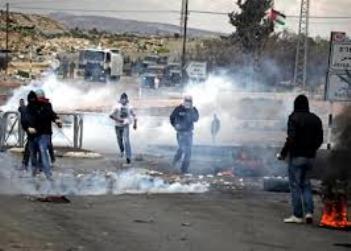 Sunday March 17, 2013, the Popular Committee against the Wall and Settlements in Beit Ummar town, north of the southern West bank city of Hebron, reported that Israeli soldiers kidnapped three children, earlier on Sunday at dawn, an issue that led to clashes between local youths and Israeli soldiers.The Committee said that eight military vehicles and three troop carriers invaded Beit Ummar through its main road, and through Yasser Arafat Road, west of the town, and headed to the center of the town, Al-Bayada and Aseeda neighborhoods.

Local sources reported that the clashes started directly after the army kidnapped the three children, and that the army fired rounds of live ammunition, rubber-coated metal bullets and gas bombs; several residents have been treated for the effects of teargas inhalation.

Beit Ummar have been subject to daily invasions carried out by the army since the beginning of this month, and the army kidnapped during these invasions 34 Palestinians, including 16.