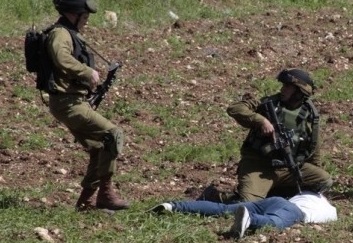 Jabour added that the area in question is grazing grounds for the shepherds, but Israeli soldiers and settlers want to expand illegal settlements in the area on the expense of the Palestinians.

He said that members of Al-Halees and Abu Sabha Palestinian families legally own the lands and that Israeli settlers in the area repeatedly attacked these lands and forced the shepherds out, so that they (the settlers) use the grazing area for their own livestock.

On Friday, a Palestinian shepherd, identified as Ahmad Mahmoud Shawaheen, suffered bruises and fractures in his leg after being attacked by settlers of the Etnael illegal settlement, near Hebron.

The shepherd was in Khallit Al-Adra area; the settlers also forced him out of the area under the pretext that the lands belong to their illegal settlement.