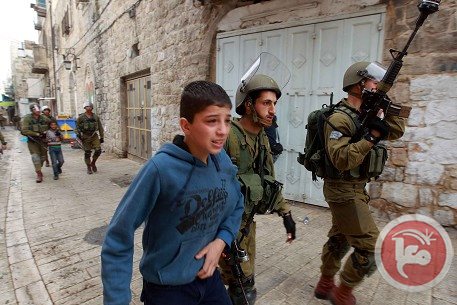 Friday March 15, 2013, Israeli soldiers kidnapped several Palestinian children in Hebron, and the Al-Tiwana area, while several Palestinians were shot by rubber-coated metal bullets, and dozens of Palestinians were treated for the effects of teargas inhalation during clashes with the army.In Hebron city, the soldiers kidnapped three children during clashes that took place in Bab Az-Zawiya area, in Hebron’s city center, the Maan News Agency reported.

Six children were kidnapped on Thursday evening and on Friday, but the Palestinian District Coordination Office (DCO) contacted its Israeli counterpart, and the army released two children but refused to release four other Palestinians, including a 10-year-oldd child.

Meanwhile, in Al-Litwana area in Hebron, the army broke into, and searched several homes and kidnapped three children before taking them to an unknown destination. The three have been identified as Hafith Al-Hreiny, 15, Malek Ghanem Al-Hreiny, 15, and Based Suleiman Al-Adra, Maan said.

Furthermore, clashes were reported in the At-Tabaqa area, near the Al-Fawwar refugee camp, south of Hebron.

Palestinian medical sources reported that one Palestinian was shot by a rubber-coated metal bullet, and dozens have been treated for the effects of teargas inhalation following clashes with the army in the area.

The settlers used batons and iron chains, while some even carried knives, and attacked the shepherds as they were in a grazing area close to the settlement, local sources said.

The shepherds suffered various cuts and bruises, while one of them, identified as Mohammad Shawaheen, 24, suffered a broken leg. One of his brothers was also among the injured.

The settlers forced the Palestinian shepherds away and brought their own sheep to graze, especially in lands meant for winter produce. The lands in question are 10 Dunams, and belong to resident Hussein Shawaheen and his brothers.