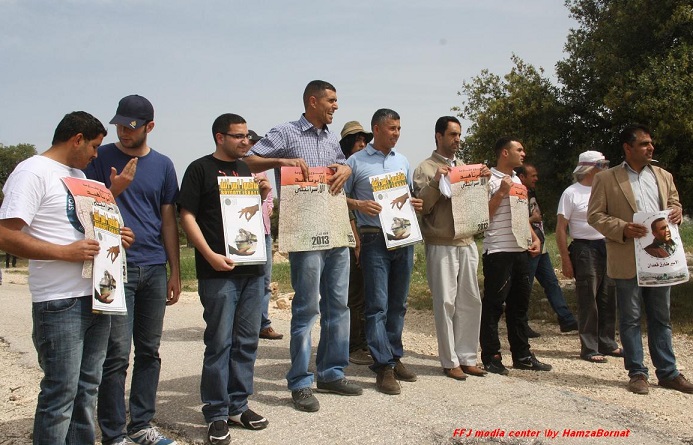 Friday March 15, 2013, the Friends of Freedom and Justice Committee (FFJ) in Bil’in village, near the central West Bank city of Ramallah, reported that dozens of nonviolent protesters have been injured after inhaling gas fired by Israeli soldiers at the weekly nonviolent protest against the Annexation Wall and settlements in the village.This week’s protest came in solidarity with Palestinian detainees, held by Israel, and holding open-ended hunger strikes demanding their release.

The FFJ said that Israeli and International peace activists participated in the protest that started following the Friday noon prayers at the local mosque, and marched towards the Wall carrying Palestinian flags, pictures of Palestinian detainees, and chanting slogans calling for boycotting Israel, the removal of the Wall, and the liberation of Palestine.

As the protesters arrived at the Abu Lemon natural reserve, adjacent to the Wall, a number of protesters attempted to cut a section of the barbed-wire fence, located just behind the concrete wall, while Israeli soldiers, stationed on the other side of the wall fired gas bombs, concussion grenades, and sprayed them with waste-water mixed with chemicals.

The attack led to clashes between local youths and Israeli soldiers, the army fired more gas bombs, and field medics treated dozens of residents for the effects of teargas inhalation.

At the village of Al Nabi Saleh, near Ramallah, soldiers stopped the march at the village entrance and used chemical water, tear gas, and rubber-coated steel bullets to force people back.

Soldiers then invaded the village and fired tear gas at residents’ homes many were treated for the effects of tear gas inhalation.

Also on Friday at al Ma’sara village, southern West Bank, Israeli troops stopped the weekly anti wall protest there at the village entrance. Soldiers forced people back into the village using rifle-buts and batons to bush people back, no injuries were reported. 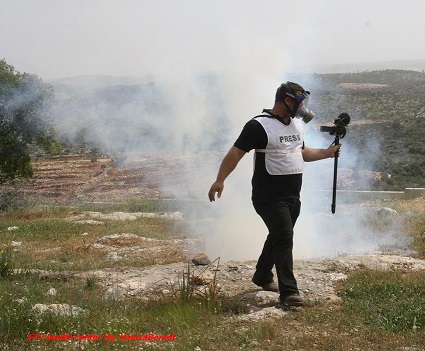 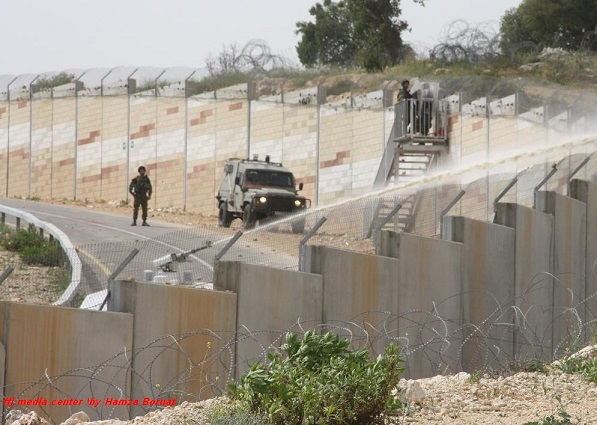