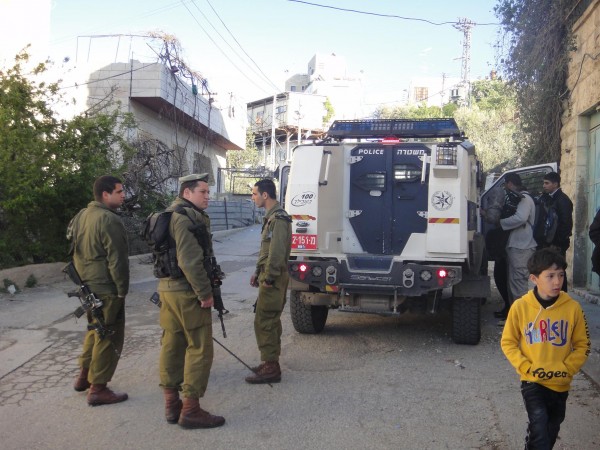 On the afternoon of the 24th March, two Palestinian Al Jazeera journalists arrived into Hebron to interview a Palestinian family living near the illegal Israeli settlement in the area of Tel Rumeida. When they arrived, settlers called the Israeli military and police, who arrived and confiscated the journalists’ ID cards, despite having seen their press credentials. The Al Jazeera reporters had their ID cards returned after around an hour, but two Palestinians from Hebron who attempted to intervene on their behalf with police were abducted and removed in a police car. Their status is currently unknown and no reason was given for their detention.

After the journalists were apprehended, police and settlers arrived into the area with rolls of barbed wire, informing another Palestinian resident that his primary access to the main road would be closed. Hashem Azzeh and his family live underneath the Tel Rumeida settlement, with their access to the main road running directly next to the settlement. This path has been repeatedly closed by the Israeli authorities since 2000, and was only opened most recently in late 2012 after extensive legal battles in the Israeli courts.

The police and settlers claimed that the path would be closed from now on, because ‘unapproved people’ had been walking along it. According to the Israeli authorities, only Hashem, his family and guests walking with them have permission to use the path. Hashem states that he has no knowledge of strangers using this route to access his house.

Without the path, Hashem and his family have to travel a much longer, rock-strewn and hazardous route to leave their home. Hashem said today, “I think they will close my access now, they will say it is for security reasons.”

He thinks that the settlers used the arrival of the journalists and the subsequent confusion as a pretext to close his path and restrict his family’s movement, in further attempts to drive them from their home – they already face regular hassle from Israeli authorities and attacks from the settlers, including on Hashem’s young children.