“I really hope these crops can reach their harvest” 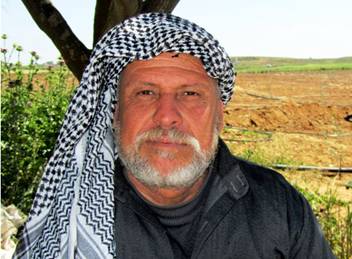 Following its disengagement from the Gaza Strip in September 2005, Israel unilaterally and unlawfully established a so-called ‘buffer zone’, an area prohibited to Palestinians along the land and sea borders of the Gaza Strip.

The precise area designated by Israel as a “buffer zone” is unclear and this Israeli policy is often enforced with live fire.

In accordance with the ceasefire agreement that ended Israel’s last military offensive on the Gaza Strip in November 2012, the Israeli Coordinator of Government Activities in the Territories (COGAT) in an online statement on 25 February 2013 declared that farmers could access lands in the border area up to 100m from the border fence instead of the previously imposed 300 meters.

However, this reference, along with the reference to the increased fishing area at sea, was removed from the statement later. Then, on 11 March 2013, an Israeli army spokesperson, in a letter to GISHA, stated “the residents of Gaza are required not to approach within 300m of the security fence”.

“We were very happy when we heard about the ceasefire and couldn’t wait to start sowing our farm lands again,” says Majid Wahdan (52) while sitting down under a tree in a plot of farmland in Beit Hanoun.

Wahdan, a farmer and father of four daughters and three sons, had been living in north east of Beit Hanoun for 35 years when, in 2003, his family’s three storey house and farming land, located approximately 400 meters from the border with Israel, were bulldozed.

“In total 36 dunums of land, which I share with my brothers, were razed. Three and a half dunums of the plot belongs to me. Many water wells in the area, including on our land, were destroyed as well. Assistance from charity organizations made us get by,” says Wahdan as he recalls the days when his home and livelihood were turned into a ‘buffer zone’. Wahdan and his family now live in a different part of Beit Hanoun.

He continues: “I replanted my own land twice between 2003 and the war in November. I put citrus trees in the land, which were bulldozed both times, destroying hundreds of tons of crops. Because the army prevents us from planting tall trees, we are now forced to plant low vegetable crops. After the November war I decided to risk it and go back to my land and the plot I rent right next to it. I planted wheat and watermelons. I really hope these crops can reach their harvest. The reason I planted watermelons is that they are cheap and only take around 70 days to grow. I don’t know what will happen so I want to quick crops that can be harvested quickly, before the ceasefire is over again.”

In addition to planting crops, Wahdan also rebuilt the water wells and irrigation networks: “In 2006 I went back to my land to rebuild a water well, but the army destroyed it after it was completed. The same happened in 2008 and 2009. The last time I fixed it was three weeks ago. Farmers who have lands closer to the border have problems with accessing water.”

Wahdan argues that water which runs through the aquifer in the area is the main reason for land razing: “I believe that the reason they level our lands is that fact that we have water that is good for farming. We have sweet water under the lands and they want to use it. This is a water war.”

The repeated destruction of his farming investments, have forced Wahdan to farm his land differently;

“if I had a free choice, I would plant citrus trees like orange and lemon trees. I’ve always had citrus trees and they are much more profitable than the short vegetable crops. Also, instead of investing in my own land, I started working on other people’s land, further away from the border. I farm two plots in Beit Hanoun, besides my own land. I couldn’t take any risks. Even now, we have to wait and see with the ceasefire. It is impossible to predict anything.”

Wahdan has incurred major financial losses over the years, and says: “there is no remedy or compensation for what we have lost. The damages of all that I’ve lost over the years, my home and all the crops, is around $250,000. I receive support from charities so that I’m able to tend to the land. They give us water irrigation networks, seedlings, and fertilizers. It helped us to get back on our feet here in the farmlands near the border. I farm the land together with my brothers and the workers we hire. We all have big families, so many people rely on the harvesting of these crops for their income.”

Farmers in the Gaza border areas regularly come under attack from the Israeli forces positioned at the border. Wahdan recalls: “2011 and 2012 were the most difficult years for us. We were shelled and shot at. Anywhere within 1 kilometer from the border fence we would be at risk of getting shot by soldiers. That is different since November.”

Despite the change post-ceasefire, Wahdan thinks that stated policies are of limited value for farmers who are tending their lands:

“official Israeli announcements stating where we can and cannot go, are not important. We don’t care about what the leaders say. What matters to us is which soldier has his shift. Shepherds who herd their sheep are allowed to walk near the border by some soldiers while others shoot at or around them. The shooting comes from soldiers who are trigger-happy. I have witnessed many attacks on farmers, both shooting and shelling. Despite the attacks, we must remind the soldiers that this is our land and that we have the right to access it. And if the situation remains calm, I will rebuild my home on my land.”

Israel’s attacks against Palestinian farmers in the Gaza Strip constitute a violation of international humanitarian law as codified under Article 147 of the 1949 Fourth Geneva Convention.

Moreover such attacks can constitute war crimes under Articles 8(2)(a)(i) and (iii) Article 8 (2)(b)(i) of the International Criminal Court’s Rome Statute. The implementation of the ‘buffer zone’, maintained through attacks, constitutes a measure of collective punishment, which is prohibited under Article 33 of the 1949 Fourth Geneva Convention.

The right to work, including in just and favourable conditions, is provided for under Article 6 and 7 of the International Covenant on Economic, Social and Cultural Rights (ICESCR). Moreover, Article 11 of the ICESCR recognizes ‘the right of everyone to an adequate standard of living for himself and his family, including adequate food, clothing and housing, and to the continuous improvement of living conditions.