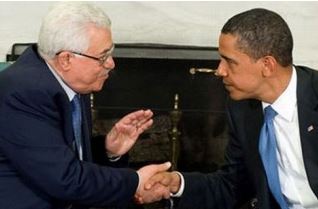 Palestinian President, Mahmoud Abbas, received on Thursday evening [August 1, 2013] a phone call from U.S. President, Barack Obama, and discussed the ongoing efforts to ensure smooth resumption of direct peace talks between Tel Aviv and Ramallah.Palestinian Presidency Spokesperson, Nabil Abu Rodeina, stated that Obama told Abbas he is committed to fully supporting the negotiations, and stressed on the importance to move the process forwards in order to achieve a comprehensive deal.

Abu Rodeina added that Obama reaffirmed the U.S. support to the two-state solution and the importance of achieving a pace agreement in the agreed upon time-frame of six to nine months.

On his part, President Abbas thanked Obama and Secretary of State, John Kerry, for their efforts to ensure a final status Middle East peace agreement.

Israeli sources have reported that Obama also phoned Prime Minister Benjamin Netanyahu “commending” him on what was described as the “courage” to resume final status talks with the Palestinian Authority in the West Bank.

It is worth mentioning that Palestinian and Israeli negotiators held on Monday their first direct session of peace talks in three years.

The resumption of talks comes amidst unclear agenda loaded with various negative aspects including Israel’s insistence to what it calls its right to build and expand settlements, mainly in major settlement blocs in the occupied West Bank and in occupied East Jerusalem.

On Thursday, the Israeli Knesset passed a bill in the first reading requiring a public referendum on any peace agreement that would require Israel to withdraw from occupied Palestinian territories labeling the issue as a referendum on “giving up” what was dubbed as “sovereign territory”.

The Times Of Israel has reported that the approved bill includes all areas in the entire country, such as the occupied Golan Heights, occupied East Jerusalem and the occupied West Bank.

In 2010, the Knesset passed a law requiring two-thirds vote or a public referendum on any agreement that requires a withdrawal from occupied Palestinian territories.

The new bill comes to enforce the first bill.
The Times Of Israel has reported that the new bill is meant to turn the referendum into a semi-constitutional law in order to prevent the Supreme Court in the country from voiding it as the court can void regular laws.

The bill still needs to survive a review by the House Committee of the Knesset, and also needs to pass two more Knesset readings likely during the winter session. If it passes all readings, it will then be signed into law.
Israel Ynet News has reported that Kerry received phone called from various congressional representatives, mainly pro-Israel lobbyists, asking for assurances of “safeguarding Israel and its interests.”

It added that a congressman, who describes himself as a friend of Israel, spoke to Kerry asking him about the possibility of having the Palestinians recognize Israel as a “Jewish State”, and Kerry responded by telling him the issue is one of his goals, and said “Israel is the homeland of the Jewish people”.

Kerry reportedly said that Israel will get to keep %85 of its settlement blocs in the occupied West Bank.

The resumption of the talks and the various reports on a final status agreement in a relatively short time-frame come amidst Israelis rejection to recognize the legitimate internationally guaranteed Palestinian rights such as the Right of Return of the refugees.

Tel Aviv never officially recognized the Palestinian rights, and rejects a full withdrawal from all territories it captured during the June 1967 six-day war.

Israel’s settlements and its illegal Annexation Wall have transformed the Palestinian territories into isolated cantons, separating various villages from their orchards and lands. Settlements are also a direct violation of International Law and the Fourth Geneva Convention.