Protest in al-Naqab against the Prawer plan displacement of Bedouins 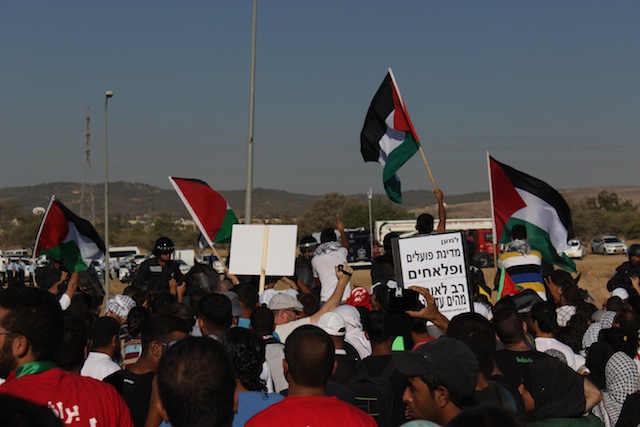 On August 1st – the national “day of rage” against the Prawer plan – protestors gathered near Beersheba, in al-Naqab, to protest the impending forcible displacement of up to 70,000 Arab Bedouins, the destruction of 35 villages “unrecognized” by Israel, and the dispossession of their lands.
The protestors waved Palestinian flags, carried signs, and chanted against the Prawer plan and the ongoing discrimination by the Israeli government. The protest was confined to a specific area by police barricades and a large, heavily armed police presence. No tear gas was used, and no arrests were made.

The Arab Bedouins, who are Israeli citizens, have rejected the Prawer plan. Adalah – The Legal Center for Arab Minority Rights in Israel – notes that, “[for] over 60 years, the indigenous Arab Bedouin have faced a state policy of displacement, home demolitions and dispossession of their ancestral land.”

According to Adalah, 70,000 Arab Bedouin – whose presence in al-Naqab dates to the seventh century – live in 35 villages that either predate the establishment of the state of Israel in 1948.

Adalah describes the Prawer plan as “a gross violation of the constitutional rights of the Arab Bedouin citizens to property, dignity, equality, adequate housing, and freedom to choose their own residence.”

The international community, including the United Nations and the European Union, has condemned the Prawer plan.