Livni: “Next Rounds Of Talks, Second Week Of August” 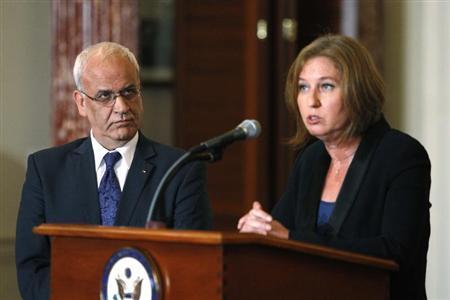 Israeli Justice Minister, Tzipi Livni, stated that the next round of direct peace talks with the Palestinian Authority (P.A) will be held in Israel in the second week of this month, and added that the first group of Palestinian detainees will be released by then.Livni told the Israeli TV Channel 10 that Israel and the P.A agreed to hold talks in different locations starting in Tel Aviv.

She added that Israel will release some detainees soon, but did not specify more details or an exact date. She only stated that the case of each detainee to be released would be separately examined before a final decision is made and implemented.

“My personal impression is that the Palestinian side did not start talks with the intent to blame Israel”, Livni said, “They sat with us relatively knowing the outcome of these talks”.

Talking to Israeli daily Yedioth Aharonoth following the first round of talks in Washington, Livni said that, despite serious talks, there are various difficulties and obstacles that will eventually accumulate, and added that she does not believe that “there will be a new Middle East”.

She also said that it is also very important to hold talks with the Palestinians without the presence of the American mediators.

“Talks will continue in the second week of August with the intension to end the conflict”, the Israeli Justice Minister stated, “All issues, and subjects, are now on the table”.