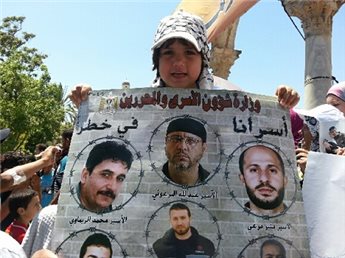 On Friday, Israeli soldiers attacked the weekly protests organized in the villages of al Nabi Saleh, Bil’in, and Nil’in, in the central West Bank, and Al Ma’ssara village in the southern West Bank. A rally in support of Palestinian political prisoners was also held on Friday, on the grounds of the Al-Aqsa mosque in Jerusalem. Israeli soldiers used tear gas and rubber-coated steel bullets to attack the weekly nonviolent anti wall and settlement protests organized in a number of West Bank communities.

In the village of al Nabi Saleh, Israeli soldiers used tear gas to attack the villagers and their supporters before even leaving the village.

Moreover, troops stormed the village and fired tear gas at residents’ homes. Many were treated for the effects of tear gas inhalation.

At the villages of Bil’in and Ni’lin, also in the central West Bank, residents and their international and Israeli supporters managed to reach the wall.

Israeli troops stationed there fired tear gas and rubber-coated steel at the unarmed protesters. As a result many civilians were treated for the effects of tear gas inhalation.

In the southern West Bank Israeli soldiers used rifle buts and batons to force the residents of al Ma’ssara and their supporters back into the village. A number of residents sustained light wounds by the soldiers attack.

In Jerusalem, a protest of over a hundred people was held at the Al-Aqsa mosque, calling on the international community to take action on behalf of the Palestinian prisoners, particularly those on long-term hunger strike who have been ignored by the media.

One protester told reporters, “We demand that the issue of the prisoners remains always a top priority for the leadership.”