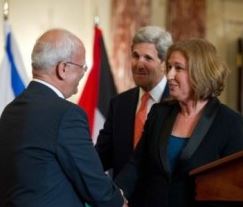 Chief Palestinian Negotiator, Dr. Saeb Erekat, stated Saturday [August 3, 2013] that the Palestinian Authority (P.A.) will not accept transitional solutions to the conflict, and is acting on negotiating on all final status issues. The official added that the files of Jerusalem, the Refugees, Settlements and Water are high priorities to the Palestinians.

He said that the Palestinian leadership in the occupied West Bank has informed the United States and Israel that all issues must be discussed, so that a comprehensive agreement can be reached.

Erekat denied reports on secrete committees negotiating with Tel Aviv, saying that the talks are all in the open under direct U.S. supervision.

He further stated that Israel intends to release 26 detainees on August 13, marking the first phase of releasing dozens of detainees, and added that Tel Aviv has cleared those detainees for release.

Furthermore, head of the Israeli negotiations team, Israeli Justice Minister, Tzipi Livni, stated on Friday at night that the second round of direct talks with the Palestinians is scheduled for August 14.

In addition, Palestinian Foreign Minister, Riyadh Al-Maliki, stated that the direct talks will be held in Jerusalem and Jericho.

Despite various reports of positive atmosphere of the renewed direct talks, various core issues could jeopardize the future of these talks, mainly Israel’s illegal settlement construction and expansion activities, the issue of Jerusalem, the Right of Return of the Palestinian refugees, borders and natural resources.