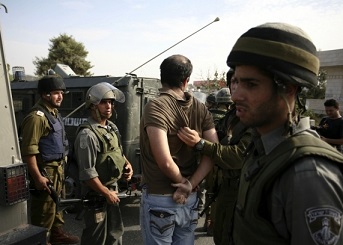 [Tuesday at dawn, August 6, 2013] Israeli soldiers invaded various Palestinian communities in the occupied West Bank, and kidnapped twelve Palestinians.Local sources in Nablus, in the northern part of the West Bank, have reported that the soldiers invaded Beta village, east of the city, broke into and searched several homes, and kidnapped one resident identified as Waddah Khaled Dweikat, 25.

Furthermore, dozens of soldiers invaded the northern West Bank city of Tulkarem, and kidnapped one resident identified as Osama Yousef Sabah, 23, after breaking into his home in the Southern Neighborhood.

In Bethlehem, soldiers invaded Artas village, and surrounded the home of resident Issa Odah Dabah, before breaking into the property and kidnapping his son Hamza, 21.

Another resident, identified as Mohammad Nasser Sabah, 18, was handed a warrant ordering him to head to the Etzion military base for interrogation.

Several soldiers also invaded the home of Hatem Sabah, head of the Teqoua’ village council, and violently searched the property.

Furthermore, army invaded Hebron city, in the southern part of the West Bank, and the Al-Arroub refugee camp, and kidnapped four Palestinians, including two children.

The Ahrar Center for Detainees Studies and Human Rights, reported Monday that Israeli soldiers kidnapped in 154 Palestinians in different parts of the occupied West Bank, and five Palestinians in Gaza, last month.

The center added that one Palestinian was shot and killed by Israeli military fire.