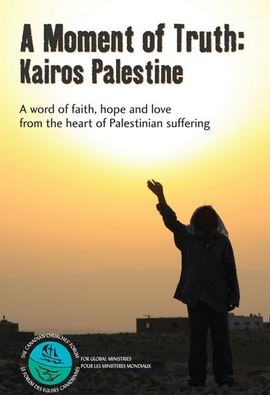 Kairos stated that the officials who are encouraging enlistment in the occupation army are conducting provocative actions that harm Christian Churches, national interests and the Christians themselves.

It added that trying to recruit the Christians is immoral, and harms the Palestinian Christian identity in the Holy Land.

“We need to be united, we need to protect our national identity, only our Arab, Palestinian, identity will be able to protect us, and protect our interests”, Kairos said, “Our choice will not be sectarian, but will only be national unity between all Palestinians regardless of their beliefs and faith”.

The statement came after Israeli Prime Minister, Benjamin Netanyahu, ordered the formation of a committee to recruit Arab Palestinian Christians in the country to the Israeli military.

The decision was made after Netanyahu held a meeting on Monday with Father Jubrael Naddaf, known for his stances encouraging enlistment in the Israeli military despite massive objections the Palestinian Christian community in the country.

When Kairos Palestine was established in December of 2009, it published its mission statement calling for people, justice and equality, expressed it rejection to the Israeli occupation, all sorts of apartheid in the world, and called for justice and equality.

This document (Kairos) is the Christian Palestinians’ word to the world about what is happening in Palestine. It is written at this time when we wanted to see the Glory of the grace of God in this land and in the sufferings of its people. In this spirit the document requests the international community to stand by the Palestinian people who have faced oppression, displacement, suffering and clear apartheid for more than six decades.

The suffering continues while the international community silently looks on at the occupying State, Israel. Our word is a cry of hope, with love, prayer and faith in God. We address it first of all to ourselves and then to all the churches and Christians in the world, asking them to stand against injustice and apartheid, urging them to work for a just peace in our region, calling on them to revisit theologies that justify crimes perpetrated against our people and the dispossession of the land.

In this historic document, we Palestinian Christians declare that the military occupation of our land is a sin against God and humanity, and that any theology that legitimizes the occupation is far from Christian teachings because true Christian theology is a theology of love and solidarity with the oppressed, a call to justice and equality among peoples.

This document did not come about spontaneously, and it is not the result of a coincidence. It is not a theoretical theological study or a policy paper, but is rather a document of faith and work. Its importance stems from the sincere expression of the concerns of the people and their view of this moment in history we are living through.

It seeks to be prophetic in addressing things as they are without equivocation and with boldness, in addition it puts forward ending the Israeli occupation of Palestinian land and all forms of discrimination as the solution that will lead to a just and lasting peace.

The document also demands that all peoples, political leaders and decision-makers put pressure on Israel and take legal measures in order to oblige its government to put an end to its oppression and disregard for the international law. The document also holds a clear position that non-violent resistance to this injustice is a right and duty for all Palestinians including Christians.

The initiators of this document have been working on it for more than a year, in prayer and discussion, guided by their faith in God and their love for their people, accepting advice from many friends: Palestinians, Arabs and those from the wider international community. We are grateful to our friends for their solidarity with us.