Israel To Build Hundreds Of Units In Settlements, Illegal Outposts 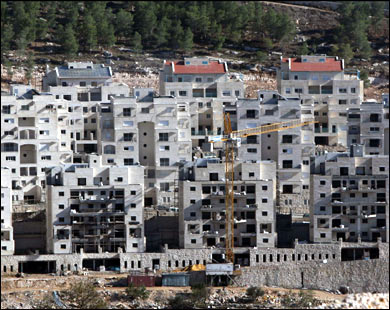 [Sunday August 11, 2013] Israeli sources have reported that the Israeli government intends to build hundreds of units for Jewish settlers, not only in settlements and in settlement blocs in the occupied West Bank and occupied East Jerusalem, but also in illegal isolated settlement outposts.The sources said that the move comes parallel with the resumption of direct negotiations with the Palestinians, scheduled to start Wednesday, and added that Israeli Prime Minister, Benjamin Netanyahu, is coordinating these settlement activities with the White House.

Israeli Maariv reported that Tel Aviv handed a “modified construction plan” to the U.S. in exchange for the release of Palestinian detainees held since before the first Oslo Agreement of 1993. Hundreds of units will be declared in Jerusalem and the West Bank under this plan.

The Arabs48 news website reported that a senior U.S. source stated that the planned constructions are part of Israel’s “carrot and stick policy” that will enable Netanyahu to keep his coalition government intact, and resume the peace process.

It added that this is why Netanyahu agreed to release 101 Palestinian political detainees, imprisoned since the first Oslo accord was signed between Israel and the Palestinian Liberation Organization (PLO).

Maariv said that the statement, the Netanyahu government will be making, will not come as a surprise to the U.S. Administration, as it was coordinated with the White House.

Last Thursday, United Foreign Secretary, Jennifer Psaki, stated in a press conference that the next round of direct Palestinian-Israeli talks will be held on August 14 in Jerusalem, then in the West bank city of Jericho.

On Friday, Psaki said that the United States still considers settlements to be illegal, but also hinted to an agreement between the Obama Administration and Tel Aviv regarding constructions in existing settlements.

She said that the construction of 800 units in Israeli settlements was discussed during talks between the two countries before the resumption of direct peace talks was officially announced.

In related news, Israeli Justice Minister, head of the Israeli Negotiations file, Tzipi Livni, said that the European Union should not intervene in the drawing of future borders between Israel and the Palestinians, and claimed that the issue is on the negotiation table.

Her statements came during a Sunday meeting in Jerusalem with German Foreign Minister, Guido Westerwelle.

She also said that the conflict with the Palestinians sometimes affects the relations with Europe.

On his part, Westerwelle said that direct peace talks serve the best interests of all parties, and stressed on the importance of refraining from unilateral moves.

On Sunday evening, Palestinian Presidency Spokesperson, Nabil Abu Rodeina, stated that the new Israeli decision to build more than a thousand units, in the West Bank and East Jerusalem, is an Israeli attempt to sabotage the peace process before it is even resumed.

He said that all of Israel settlements in the occupied territories are illegal and illegitimate under International Law, and added that “not a single Israeli settlement will remain in the future independent Palestinian state.

Besides the fact that settlement are illegal under International Law and the Fourth Geneva Convention, they are also one of the main obstacles to peace in the region as they are built in occupied territories, largely on privately-owned Palestinian lands.

Along with the Apartheid Wall, settlements have turned the Palestinian areas into isolated ghettoes, separating the villagers from their lands, or what is left of them, and diminished the chances of establishing a future contiguous and independent Palestinian State.