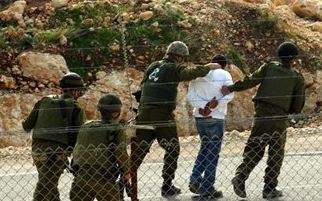 Israeli soldiers invaded on Monday at dawn [August 12, 2013] various districts in the occupied West Bank, broke into and searched several homes, and kidnapped 10 Palestinians. Soldiers also installed various roadblocks.Local sources have reported that at least twelve armored Israeli military vehicles invaded the Al-Far’a refugee camp, near the northern West Bank city of Jenin, and clashes with local youths who hurled stones and empty bottles at them.

Soldiers fired gas bombs and rubber-coated metal bullets at the residents, and left the area to invade the central West Bank district of Tubas.

The Maan News Agency has reported that dozens of soldiers invaded Ras Al-Ein, in the northern West Bank city of Nablus, broke into and searched several homes, and kidnaped two identified as Ahmad Mer’ey Hawwash, 21, and Firas Hawwash, 22.

In addition, soldiers invaded the northern West Bank city of Qalqilia, violently broke into and searched the Qalqilia Islamic Club, and kidnapped two of its administrators identified as Mohammad Abu Salman and Monther Nassar.

Medical sources gave reported that resident Anas Abu Haikal, 23, from Hebron, suffered various cuts and bruises after being assaulted by the soldiers, and was moved to a local hospital.

Dozens of soldiers further invaded the Al-Ezariyya town, east of occupied East Jerusalem, and broke into the home of Ramadan Hijazi in Al-Qastal area, in an attempt to kidnap him, but he was not home. Clashes have also been reported between local youths and the invading soldiers.

The invasions and arrests are part on daily assaults carried out by the soldiers in different parts of occupied Palestine.