Army Kidnaps A Journalist Near Ramallah 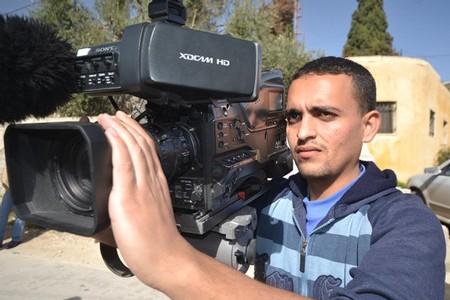 The International Solidarity Foundation for Human Rights have reported that Israeli soldiers kidnapped, on Tuesday at dawn, a Palestinian journalist identified as Mohammad Shokry Awad, from his home in Bodros village, west of the central West Bank city of Ramallah.Ahmad Al-Beetawy, the Foundation’s lawyer, stated that the dozens of soldiers invaded the village, and violently broke into the home of Awad before kidnapping him.

He said that the soldiers gathered all family members in one room, and took Awad to a corner in the house where they violently interrogated him.

Awad is a cameraman working from the Wattan News Agency in Ramallah; he was kidnapped by the army in 2005, and was imprisoned for five months.

The Palestinian security forces in the West Bank also previously arrested and imprisoned him, the Wattan News Agency has reported.