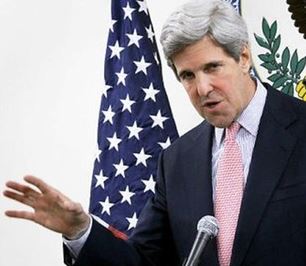 Commenting to the Israeli decision to build hundreds of units in illegal Israeli settlements in the occupied West Bank, U.S. Secretary of State, John Kerry, said Israel “only announced bids”, and that he does not believe this announcement would harm political talks between Israel and the Palestinians. The Israeli decision includes hundreds of bids for new constructions in Jewish settlements in occupied East Jerusalem, and the occupied West Bank.

Israeli Housing Minister, Uri Ariel, stated that his ministry would be announcing bids for the construction of a thousand units in the West Bank.

He said that Israel intends to build 400 units in Gilo settlement, 138 units in Zeev settlement, and 793 additional units in Jerusalem.

Ariel added that 117 units will be built in Ariel, in the northern part of the West Bank, 149 in Efrat settlement near Bethlehem, 92 in Ma’ale Adumim settlement bloc, and 36 in Beitar Illit in the Gush Etzion settlement bloc.

“We will not allow anybody to dictate to us what to do, and what not to do”, he said, “We will build whenever and wherever we want”.

Israel’s illegal settlements and settlement blocs spread across the occupied West Bank and occupied East Jerusalem are amongst the main obstacles to any future peace agreement as they are built in occupied territories in direct violation of International law.