Al-Khoffash: “What Is Needed Is The Release Of All Detainees” 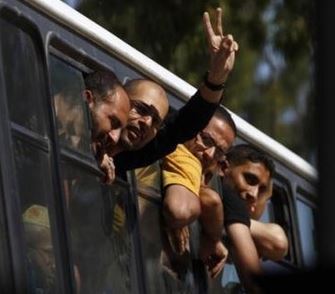 Fuad Al-Khoffash, head of the Ahrar Center for Detainees Studies and Human Rights, demanded the Palestinian Authority (P.A) in the West Bank, to insist on the release of all detainees imprisoned by Israel, instead of abiding by a conditional time frame for the release of only 104 detainees within 9 months, including 26 on Tuesday at night.Al-Khoffash said that the P.A should not accept to have the detainees’ release dependent on the progress of political talks with Tel Aviv, adding that this issue made “the legitimate cause of the detainees subject to Israeli maneuvers and blackmail.”

He further stated that, once again, the issue of the detainees is being marginalized and partitioned, adding that the file of old detainees (imprisoned before 1993) is only part of the entire cause of thousands of detainees illegally held and imprisoned by the Israeli occupation of Palestine.

“The P.A. should have demanded, and insisted, on the release of every detainee without exceptions”, Al-Khoffash said, “This is a better technique, raise the demands to achieve better results, when the detainees conduct hunger strikes, they ask for what is impossible to achieve what is possible”.

Al-Khoffash, also a legal researcher and former political prisoner, said that the intended release of 26 detainees in the first stage, drops the number of old detainees to 79, including 14 from historic Palestine, 9 from Jerusalem, 48 from the West Bank, and 8 from the Gaza Strip.

In related news, the Israeli Supreme Court dismissed petitions, filed by Israeli families of persons allegedly killed by some of the detainees, against the release of the 26 detainees. The decision marks the final stage before their release.

Israeli Ynet News has reported that the head of the Supreme Court, Asher Grunis, said in a statement that the he has no doubt the issue “is difficult and sensitive, our hearts go to the families of the victims”.

Grunis added in his statement that “the release of detainees is part of political negotiations that fall under the jurisdiction of the Israeli government.”

The Supreme Court’s decision paves the way for the release of the detainees as planned late on Tuesday at night.

The Israeli Prison Authority has already transported the 26 detainees to the Ayalon Prison in preparation for their release.