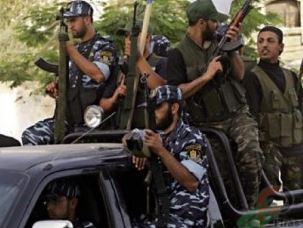 WAFA said that the Internal Security Forces, run by Hamas in Gaza, want to prevent any celebrations when welcoming freed detainees in Gaza, and ordered the removal of a celebration tent installed by the Fateh movement in front of the City Council in Khan Younis, in the southern part of the Gaza Strip.

It added that Hamas ordered owners of print shops not to print any posters or signs related to the release of the detainees, and prevented any graffiti on the walls.
The Hamas movement did not comment on the issue, and did not confirm or deny the report.

On Tuesday, Fuad Al-Khoffash, head of the Ahrar Center for Detainees Studies and Human Rights, demanded the Palestinian Authority (P.A) in the West Bank, to insist on the release of all detainees imprisoned by Israel, instead of abiding by a conditional time frame for the release of only 104 detainees within 9 months, including 26 on Tuesday at night.

The former political prisoner said that the issue of the detainees is being marginalized and partitioned, adding that the file of old detainees (imprisoned before 1993) is only part of the entire cause of thousands of detainees illegally held and imprisoned by the Israeli occupation of Palestine.