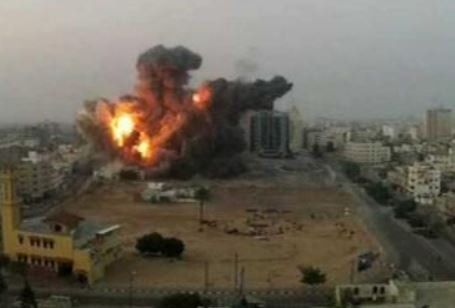 Israeli military sources have reported that the Israeli Air Force fired, on Wednesday at night, a number of missiles targeted different areas in the Gaza Strip.The army claimed that the Israeli strike came a few hours after the missile was fired into Israel, and that the Israeli attack targeted a group behind the incident; no casualties have been reported. It said “the strike scored direct hits.”

In a statement issued by the leadership of the Israeli military, the army said that it will continue to target anyone who attacks Israel, Israeli daily, Haaretz, reported.

Israel said that Palestinian fighters fired a shell into the Negev town of Sderot as soon as Israel started the release of 26 Palestinian detainees to boost talks with the Palestinian leadership in the West Bank, before the second round of direct talks in held.

Haaretz added that Palestinian and Israeli negotiators will be meeting in Jerusalem on Wednesday; the meeting comes as a follow-up to two meetings held in Washington.

The Palestine News & Info Agency (WAFA), run the by the Palestinian Authority in the West Bank, has reported that President Mahmoud Abbas welcomed, on Wednesday at dawn, the eleven West Bank detainees, at his presidential
headquarters.

15 more detainees have been released, and were sent home to the Gaza Strip.

Thousands of Palestinians gathered in Ramallah and Gaza to welcome the detainees, and to celebrate their release.