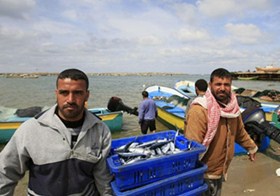 He added that the three, identified as Khader Marwan Sa’eedy, Mohammad Jamal No’man, and Hasan Ali Morad, were moved to the Shifa Medical Center in Gaza, suffering moderate injuries.

The attack is the latest of a series of ongoing violations against the Palestinian fishermen, and their boats, in Palestinian water in the coastal region, dozens of casualties and arrests have been reported.

When Israel imposed the illegal siege on Gaza in 2006, the fishermen were limited to only three nautical miles off the Gaza shore.

Yet, the fishermen and their boats are constantly attacked even within those three miles leading to dozens of casualties, and excessive property damage.

As part of the ceasefire agreement of November 2012, Israel agreed to allow the Palestinians to fish within six nautical miles of the shore, but unilaterally decreased the allotted area to three miles.

Last May, Israel decided to allow the fishermen to fish within six nautical miles of the Gaza shore, but the Navy continued to attack them even within the three nautical miles.

Under the Oslo accords in the mid-nineties, the Palestinians are supposed to be allowed to fish in 20 nautical miles off the Gaza shore.