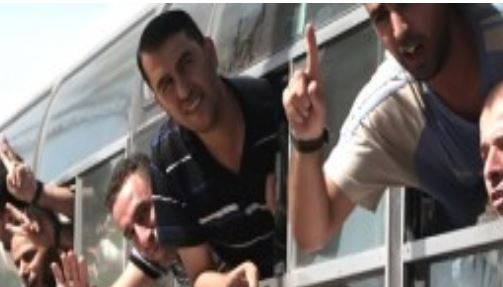 The release of 26 Palestinian political prisoners, held by Israel, has been concluded as 11 West Bank detainees reached the Palestinian Presidential headquarters in Ramallah, and 11 Gaza Strip detainees made it to the coastal region, through the Erez (Beit Hanoun) crossing.Dozens of thousands of Palestinians gathered in the central West Bank city of Ramallah, and in Gaza city, and welcomed the freed detainees in massive celebrations.

The released detainees were transported, to Ramallah, in four official Palestinian Authority vehicles, after tinted Israeli buses moved them to a roadblock near the city.

West Bank detainees were welcomed by President Mahmoud Abbas, and thousands of Palestinians, before heading to the grave of late President, Yasser Arafat, where they placed flowers on his grave, and prayed for his soul.

Abbas told the detainees, and the mass crowds, that the Palestinian leadership would not rest before every Palestinian detainee enjoys freedom.

Thousands of Palestinians also gathered at the Beit Hanoun (Erez) Terminal, in the northern part of the Gaza Strip, and welcomed the 15 released Gaza Strip detainees.

Hundreds of social and local figures, leaders of Islamic and national factions, and thousands of residents celebrated the release.

They are members and supporters of different factions, including Hamas and Fateh.

Approximately 78 more detainees will be released by Israel within 9 months as long as the recently renewed peace talks do not stop.

Former political prisoner, head of the Ahrar Center for Detainees Studies and Human Rights, stated that 14 of the detainees are from historic Palestine, 9 from Jerusalem, 48 from the West Bank, and 8 from the Gaza Strip.

Back in June, the Prisoner Support and Human Rights Association (Ad-Dameer) issued a report revealing that Israel is holding captive 5058 Palestinians, including 222 children, 15 women, and 13 legislators.

The number also includes 147 detainees (including eight legislators) held under arbitrary Administrative Detention orders without charges. 186 detainees are from Jerusalem, 209 from historic Palestine, and 422 from Gaza.