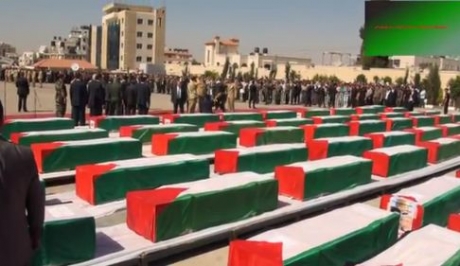 Israeli Yedioth Aharonoth issued a reported, Wednesday [August 14, 2013] of a secret agreement between Israel and the Palestinian Authority (P.A.) in the West Bank regarding the transfer of the remains of all slain Palestinians, buried in the Numbers Graveyard.The paper quoted a political source in Tel Aviv stating that the agreements is considered “an act of good will”, and aims at boosting and advancing the recently resumed direct peace talks.

The source said that, after Israeli released 26 detainees on Tuesday at night, and the intention to release more Palestinian detainees, the Israeli government decided to release the remains of all slain Palestinians.

Palestinian Minister of Civil Affair, Hussein Ash-Sheikh, stated that the Palestinian side is cooperating with Israel to provide DNA analysis to determine the identities of the slain Palestinians, so that their families can be officially informed, and proper burials can take place.

In late May of last year, Israel handed the P.A. the remains of 91 slain Palestinian, buried in the Numbers Graveyard”, and an official military burial ceremony took place in the central West Bank city of Ramallah.