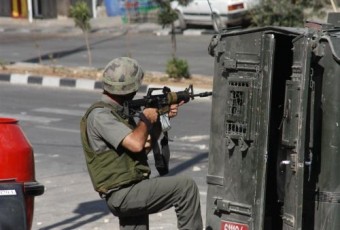 Palestinian medical sources have reported that a Palestinian youth has been shot and injured, on Wednesday evening [August 14, 2013] during clashes with Israeli soldiers at the entrance of Silwad town, near the central West Bank city of Ramallah. Israeli Radio, Channel 2, stated that the youth was shot by a live round in his foot, and was moved by Israeli medics to the Shaare Zedek Hospital in Jerusalem.

The youth was injured during clashes that took place after the army invaded the area, and attacked several residents, the Palestine News Network (PNN) has reported.

The seven are members of the “Shabiba” student’s bloc, of Fateh movement.