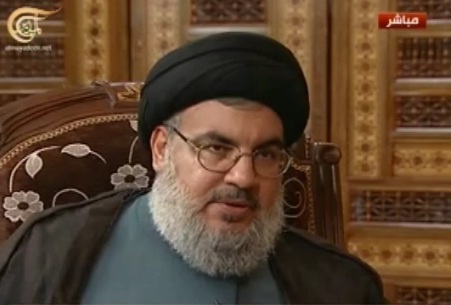 Secretary-General of the Lebanon-based Hezbollah Party, Hasan Nasrallah, stated during a televised interview with the Al-Mayadeen TV, on Wednesday August 14, 2013, that Hezbollah fighters were behind last week’s attack against Israeli soldiers who violated Lebanese sovereignty.He said that the Islamic resistance was behind the operation in Labbouna area, more than a week ago, as Israeli soldiers violated Lebanese sovereignty, and crossed into Lebanese soil.

Nasrallah added that his fighters knew in advance that Israeli soldiers of the Golani Brigade will be passing through Labbouna, and planted explosives that were detonated as the soldiers passed through inflicting various injuries.

“It wasn’t just by chance, It was not a landmine that the army left in previous wars”, he said, “Our fighters planned it, and successfully carried out their mission”.

“Two groups of Israeli soldiers invaded Labbouna, our fighters monitored them and detonated two charges targeting the invading troops”, Nasrallah added, “Our operation was defensive, and the Israeli enemy was surprised; armed clashes also took place between the invading soldiers and our fighters”.

Hezbollah leader also said that his party will not tolerate Israeli violations, and added that the “the feet that invade our land will be severed”.

“We will fight them whenever they violate our country, will be not tolerate their offensives and violations”, Nasrallah said, “This is our land, we will never allow them to invade it”.

He also slammed the stances of Lebanon’s president, Michael Suleiman, and his government, and said that they “have week positions, instead of firm responses, whenever Israel violates Lebanese territory”.

“The Israeli invasion to Labbouna was not the first”, Nasrallah added, “We recently witnessed various Israeli violations that target the resistance, and the people”.

Commenting on the Israeli war on Lebanon in July 2006, Nasrallah stated that his party was ready for an extended war that could have lasted for more than six months.

“Israel did not expect us to have all of these capacities and military capabilities, including our advanced wireless communication systems”, he said, “One of the reasons behind Israel’s defeat in this war is their lack of intelligence information, and obtaining wrong information”.

“We were capable of shelling Tel Aviv during the war, but we did not do so because we wanted to protect Beirut’, Nasrallah added, “We have missiles that can strike Eilat”.