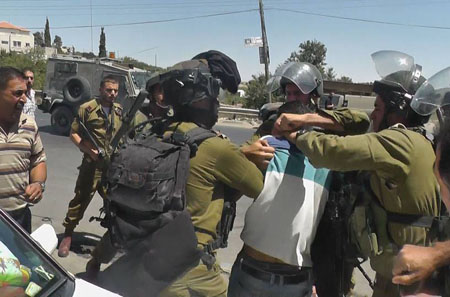 In its Weekly Report On Israeli Human Rights Violations in the Occupied Palestinian Territories for the two week period of 01 – 14 August 2013, the Palestinian Center for Human Rights (PCHR) found that Israeli forces killed a civilian in the east of al-Bureij refugee camp in an excessive use of force.In addition, Israeli forces wounded a Palestinian farmer while working on his farmland, east of Gaza City. A Palestinian civilian was wounded by a rubber-coated metal bullet during an Israeli incursion into Beit Ummar village, north of Hebron.

Israeli forces bombarded open land in the northern Gaza Strip. A child sustained scratches and bruises as window fragments scattered over him due to the bombing. Israeli forces have continued to use excessive force against peaceful protesters in the West Bank. Dozens of protestors suffered tear gas inhalation and sustained bruises due to Israeli soldiers’ attacks.

In the West Bank, on 07 August 2013, a 21-year-old Palestinian was wounded by a rubber-coated metal bullet to the left shoulder during an Israeli incursion into Beit Ummar village, north of Hebron.

Israeli forces conducted 62 incursions into Palestinian communities in the West Bank, abducting at least 54 Palestinian civilians, including 4 children and 2 photojournalists.

On 02 August 2013, an Israeli infantry unit moved into farmlands around Kherbet Um al-Khair, to the east of Yatta, south of Hebron. They denied members of al-Hatheleen family access to the lands and a water well used by the residents for them and their livestock. Israeli soldiers declared the area as a closed military zone. Besides, the residents were threatened to leave the area, otherwise, they would be abducted. An Israeli officer showed a detailed plan about schemes to build 60 settlement units in the abovementioned area.

During the reporting period, using lethal force, Israeli forces killed a Palestinian civilian who attempted to cross the border fence into Israel in the east of the Gaza Strip. A Palestinian farmer was also wounded when Israeli forces opened fire at him on his farmland, east of Gaza City, while another civilian was wounded during an Israeli incursion into Beit Ummar village, north of Hebron. Moreover, many protestors suffered tear gas inhalation during peaceful protests against the construction of the annexation wall and settlement activities in the West Bank. Besides, dozens sustained bruises due to Israeli soldiers’ attacks.

On 10 August 2013, Israeli forces stationed along the border fence, east of al-Bureij refugee camp, in the central Gaza Strip, killed Hussein AwadAllah (al-Nouri) (34), from al-Nusairat refugee camp. They targeted him directly when he attempted to cross the border fence into Israel. The aforementioned person sustained a bullet wound to the right shoulder, as the bullet settled in the belly and caused his death. Israeli forces kept his body for a few hours and then delivered him to the Ministry of Health in Gaza.

On 11 August 2013, Israeli forces stationed along the border fence, east of Gaza City, opened fire at Hamada Jneid (21) and wounded him in the left leg (the bullet entered and exited) while he was working on a farmland 400 meters away from the border.

On 14 August 2013, Israeli warplanes bombarded an open land in the northern Gaza Strip. As a result, material damage was caused to a nearby house, where a child sustained scratches and bruises because of window fragments that scattered due to the explosion.

In the Gaza Strip, on 22 July 2013, Israeli forces moved nearly 300 meters into the east of al-Bureij refugee camp, in the central Gaza Strip. They levelled areas of land along the border fence while warplanes were hovering overheads.

Restrictions over the Palestinian farmers, who were denied access to their lands south of Hebron, continued.

During the reporting period, Israeli forces continued the systematic use of excessive force against peaceful protests organised by Palestinian, Israeli and international activists against the construction of the annexation wall and settlement activities in the West Bank. As a result, dozens suffered tear gas inhalation and others sustained bruises due to Israeli soldiers’ attack on them.

In addition, the PCHR calls upon the Parties to international human rights instruments, especially the Covenant on Civil and Political Rights and the Covenant on Economic, Social and Cultural Rights, to pressurize Israel to comply with their provisions in the Occupied Palestinian Territories, and to compel it to incorporate the human rights situation in the Occupied Palestinian Territories in its reports submitted to the concerned committees.