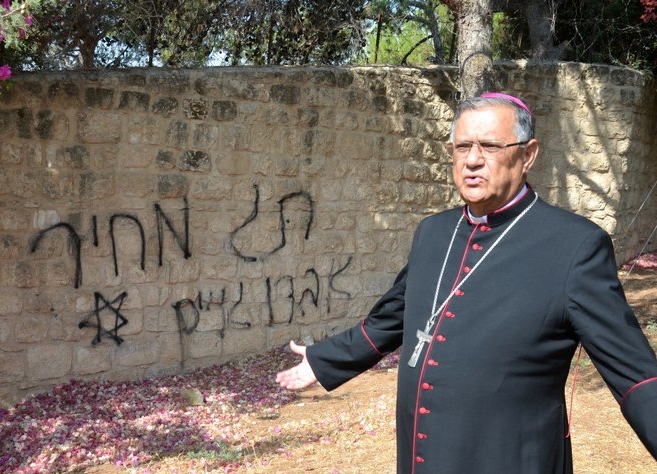 Patriarch Fuad Twal, archbishop of the Roman Catholic Church, visited the monastery and strongly denounced the repeated attacks carried out by Israeli Price Tag extremists against churches and mosques in different parts of Palestine.

Greek Orthodox Archbishop, Atallah Hanna, also denounced the attack on Deir Jamal Monastery, and stated that the graffiti and the nature of the attack is similar to frequent attacks carried out by racist, extremist Israeli settler groups that do not believe in coexistence, and human brotherhood.

“We have witnessed increasing attacks against Islamic and Christian holy sites, and even graveyards, the message is to get us out of our land”, Hanna said, “But, our response is that we are here to stay, this is our homeland, those are our holy sites, and we reject all forms of racism and fundamentalism regardless of their origin”.

On Monday at dawn [June 24], a number of masked extremist Israeli settlers attacked 22 Palestinian cars in Beit Hanina, in occupied East Jerusalem, punctured their tires before drawing the Star of David on one of the vehicles, and wrote racist graffiti on the front wall of a local home.

The extremists also wrote racist graffiti on some graves in the Christian Greek Orthodox graveyard in Jaffa.

The settlers wrote “Price Tag”, “Revenge”, and drew the Star of David on a number of graves.

They further wrote more racist graffiti on a wall of a building inhabited by the head of the Orthodox Society in Jaffa, and even wrote graffiti on the wall of the home Khaled Kaboub, an Arab District Court Judge in Tel Aviv.

On Thursday [June 13 2013] extremist settlers defaced a Christian Cemetery in Jaffa, and spray-painted “Price Tag”, and “Revenge” on tombstones.

Dozens of Price Tag attacks have been carried out against Churches, Mosques, Islamic and Christian graveyards, Palestinian lands and orchards [including burning and uprooting dozens of trees and farmlands], Palestinian property, and in some cases targeted Israeli peace groups.