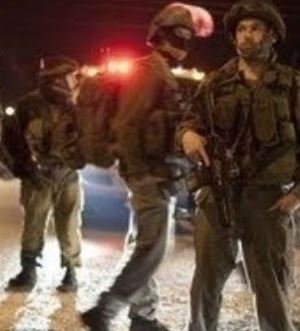 The sources stated that clashes took place between dozens of local youths and Israeli soldiers who invaded the Balata refugee camp, in addition to clashes that took place in Amman and Al-Hisba Streets in the city.

The army fired dozens of gas bombs and rubber-coated metal bullets; dozens of residents have been treated for the effects of tear gas inhalation.

Undercover forces of the Israeli army, driving local Palestinian cars, also kidnapped two Palestinians, including one child in Balata and took them to an unknown destination.

The two have been identified as Abdul-Jalil Khaled Qqtqb, 21, and Ahmad Salama Hash-Shash, 16.

Also, dozens of soldiers invaded the Deheisha refugee camp, south of Bethlehem, kidnapped on child, shot and injured another resident.

The kidnapped child has been identified as Ahmad Abu Arafa, 16; he was taken prisoner after the army broke into his family’s home in the camp, and violently searched it.

Another resident, identified as Karam Nasrallah Abed-Rabbo, 21, was shot by a live round of the leg, and was moved to a local hospital.

On Tuesday evening, several Israeli military vehicles invaded Bethlehem, and drove around in its main streets before evacuating from the city.