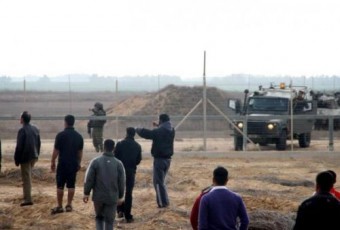 Palestinian medical sources reported on Tuesday evening [August 20, 2013] that two young Palestinian men have been shot and injured by Israeli military fire east of Jabalia town, in the northern part of the Gaza Strip.The sources said that the two, 18 and 19 years of age, were moved to the Kamal Adwan Hospital, suffered moderate injuries, after being shot in the legs.

The latest attack is another violation to the ceasefire agreement, mediated by Egypt and a number of international countries, between Israel and the resistance in Gaza.

On Tuesday evening [August 13, 2013], Palestinian medical sources have reported that three fishermen have been detained, and violently attacked by Israeli soldiers, in Palestinian territorial waters, resulting in moderate injuries.

The body of the slain Palestinian, identified as Hussein Abdul-Hadi Awadallah, 30, was handed by Israel to the Palestinian side in Gaza. He is from An-Nusseirat refugee camp, in central Gaza.