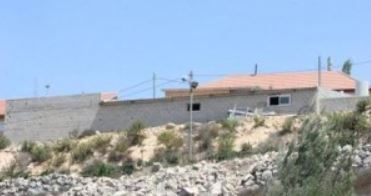 Ahmad Salah, an activist against Israel’s illegal settlements and its apartheid wall in Al-Khader town, south of Bethlehem, stated Tuesday [August 20, 2013] that a number of settlers installed mobile homes on lands that belong to residents of the town.He said that the settlers came from Eliezer illegal settlement, built on lands that belong to Al-Khader residents, the Al-Quds Newspaper reported.
Salah added that the settlers also installed a shed, and built a large home, adding that the area is question is 150 Dunams (37 Acres) of privately owned Palestinian lands.

The Israeli government recently approved hundreds of units for Jewish settlers in the occupied West Bank, including in occupied East Jerusalem.

The approvals came despite the resumption of direct peace talks between Tel Aviv and Ramallah, and were seen as a provocative move that is meant to kill the negotiations in their track.

Netanyahu also said that all of Israel’s settlements, and what he described as “new neighborhoods”, would always remain under Israeli sovereignty.