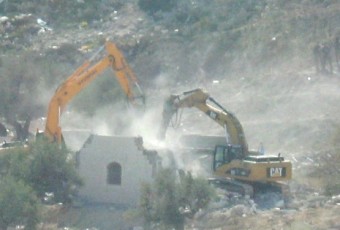 Local sources have reported that dozens of Israeli soldiers invaded, on Tuesday morning [August 20, 2013] Silwan town, south of the Al-Aqsa Mosque in occupied East Jerusalem, and partially demolished homes under the pretext that they were built without a construction permit.The sources said that dozens of soldiers, accompanied by personnel of the Jerusalem City Council, invaded the area and attacked a number of homes.

Army bulldozers then demolished sections of a number of homes, and uprooted farmlands in the town.

Ahmad Rweidy, Presidential Adviser of Jerusalem Affairs, denounced the latest Israeli violation against the Palestinians, and their property, especially in occupied East Jerusalem, adding that Israel refrains from granting construction permits to the Palestinians.

Rweidy stated that Israel is focusing on areas where it intends to build and expand settlements after removing the indigenous Palestinian population.

“Yesterday, the army removed tents that belong to the Al-Ka’abna Bedouin tribe, in Beit Hanina in Jerusalem, so Israel can build Jewish settlements”, he said, “Now, here in Silwan, they want to build settlements in Wadi Hilweh and Al-Bustan”.

He told the Palestine News Network (PNN) that the Jerusalem file is a hot topic, an issue that pushes Israel to rapidly increase its illegal settlement activities whenever there are political talks taking place.

“They are building in Ras Al-‘Amoud, in Jabal Al-Mokabbir, Sheikh Jarrah, Abu Ghneim, in addition to so many Palestinian areas, and towns in and around occupied East Jerusalem”, he said, “They are building, illegally confiscating Palestinian lands so that they can expand their illegal settlements, all of those violations are directly connected to the political process”.

“We need to counter settlement activities, the destruction of our homes; Israel is threatening to demolish 20.000 homes in Jerusalem”, Rweidy stated, “The Palestinian Authority should learn from earlier experiences with Israel, Jerusalem should be the top priority, the Palestinian Ministerial Council needs to support occupied Jerusalem, every ministry must have a branch specialized in Jerusalem affairs”.

The bulldozers also uprooted a land that belong to Al-Abassy family, in Wadi Hilweh, and demolished a 60 square-meter room that belong to resident Khaled Az-Zeer.

In related news, soldiers demolished two hothouses and four rooms that in Beit Dajan village, near the northern West bank city of Nablus.