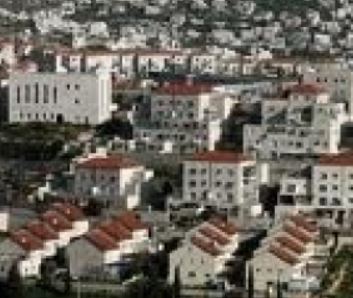 Israeli sources have reported that the Finance Committee of the Jerusalem City Council will be convening this coming Sunday to approve a new budget for infrastructure aiming at adding 1500 units for Israeli settlers in occupied Jerusalem.Palestinian Researcher, specialized in Israeli settlements affairs, Ahmad Son-Lban, stated that the units are meant for expanding Ramat Shlomo settlement towards the Palestinian town of Shu’fat and the Ramot settlement.

He added that Regional Construction and Planning Committee initially approved the plan back in February of last year.

The researcher said that Israel approved the plan as a punishment to the Palestinians after they were voted in a nonmember observer state at the United Nations in 2012, and added that the plan was originally presented for appeals in March of 2010, as U.S. Vice President, Joe Biden, was visiting the region.

The issue that “angered” the United States, especially as it came as Biden was touring the area trying to get Tel Aviv and Ramallah back on the negotiations table.

He further stated that appeals have been against the plan, but the Israeli Constructions Committee rejected some of the appeal, and did not even look into the rest.

Sob-Laban stated that one of the main issues behind speeding the approval and starting the actual construction is related to settler road #21 that would add two new roads that lead to Ramat Shlomo, and that the Regional Committee requires plans for new roads before approving new units.

Israel has recently approved thousands of units for Jewish settlers in occupied East Jerusalem, and in the West Bank.

Various countries around the world denounced the new Israeli plans, stated that Israel’s settlements in the occupied West Bank and in occupied East Jerusalem are illegal under international law, and urged both sides to “refrain from unilateral moves that would jeopardize direct peace talks”.