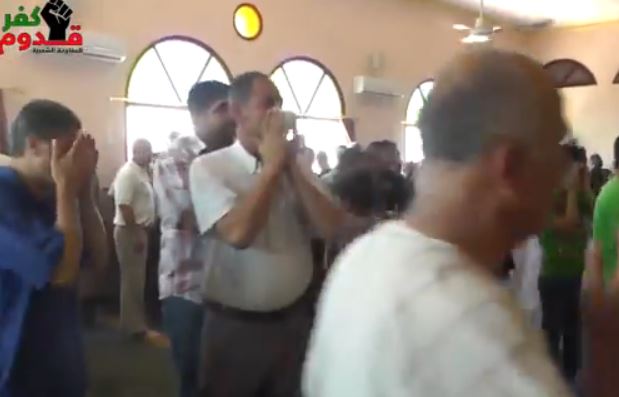 Palestinian medical sources have reported Friday [August 23, 2013] that dozens of worshipers have been treated for the effects of teargas inhalation after Israeli soldiers fired gas bombs into Omar Bin Al-Khattab Mosque, in Kufur Qaddoum village, near the northern West Bank city of Qalqilia.The attack took place after the soldiers used excessive force to suppress the weekly protest against the Annexation Wall and settlements.

Eyewitnesses have reported that soldiers, stationed on a mountain overlooking the village, fired dozens of gas bombs towards Omar Bin Al-Khattab Mosque during the Friday noon prayers, and that at least two gas bombs fell into the mosque.

Dozens of worshipers, including elderly, suffocated after inhaling gas and received treatment by local medics who rushed to the scene.

Furthermore, Morad Eshtweity, Coordinator of the Popular Committee against the Wall in Kufur Qaddoum, stated that the dozens of soldiers invaded the village approximately at 11 before noon, and fired dozens of home towards the residents, and a number of homes.

Local residents in the village said that they are determined to continue their weekly protests against the illegal Wall and illegal settlements despite ongoing and escalating Israeli military aggression against them and against their village.

Also on Friday, protests against the Wall and settlements were held in the Nabi Saleh, Bil’in, Nil’in, near the central West Bank city of Ramallah, and in Al-Ma’sara village in southern West Bank.

Residents and their international and Israeli supporters in the villages of Bil’in and Ni’lin, managed to reach the wall.

Israeli soldiers, stationed on the other side of the wall, fired tear gas and rubber-coated steel at the unarmed nonviolent protesters. As a result, many civilians were treated for the effects of tear gas inhalation.

Meanwhile in the nearby village of Nabi Saleh, Israeli soldiers used tear gas to suppress the villagers and their supporters before leaving the village.

Shortly afterwards, dozens of soldiers stormed the village and fired tear gas at residents’ homes, many were treated for the effects of tear gas inhalation.