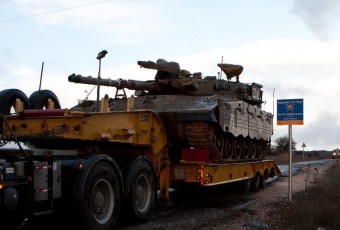 Israeli sources has reported that military and security commanders in Tel Aviv believe that a limited war between Israel and Syria is possible should Washington decide to strike Syrian targets, and Syria’s army of President Bashar Assad.The sources said that once the Syrian army is facing a war with the U.S and other countries, it will not be able to operate along the border, and that a likely scenario is that missiles will be fired into Israel, but the Israeli defense systems, and the Air Force, will be able to intercept and destroy Syrian missiles.

Israeli Channel 10 quoted a senior Israeli army general stating that, despite the current analysis of the situation, all Israelis are advised to seriously take instructions issued by the military, especially regarding gas masks.

It added that Israeli Defense Minister, Moshe (Bogie) Ya’alon, recently visited northern border areas to personally review preparations along the border amidst talks of a U.S-led war on Syria.

Furthermore, Israeli security and military officers stated that all current indications show that any attack carried out by the Syrian army against Israel will be week, as the army is exhausted facing fighters and armed opposition in his country.

They said that what this really mean is that Syria does not have enough military supplies and capabilities, its army is weakening, therefore it will not be able to attack Israel, and any possible war will be limited.

The officials further stated that, in the case of a war, Israelis would have to use shelters, insulated rooms, and that “such a war would break the routine in the Israeli society”.

An Israeli army commander at the Northern Front stated that the army is capable of intercepting long-range and high velocity missiles using the advanced Tamir Missile Shield systems.

The commander added that Israel doubled the deployment of its soldiers along the northern border, and even increased the number of support brigades, as part of the preparation for further escalation with Syria.

Channel 10 said that the number of Israelis who are now asking to be handed gas masks witnessed a sharp increase, while just a few days ago they were mocking the chances of a war with Damascus.

On Sunday, Israeli President, Shimon Peres, met the visiting French Foreign Minister, and urged France to act against the Syrian president and his army, and to destroy the “Syrian chemical weapons”.