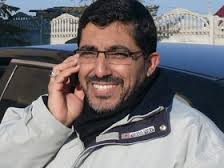 Wednesday [August 28, 2013] Palestinian detainee Dirar Abu Sisi stopped his hunger strike after reaching an agreement with the Administration of Israeli Bir Shiva (Be’er As-Sabe’) Prion, south of the country, to remove him from his solitary confinement.The Ahrar Center for Detainees Studies and Human Rights has reported that The Prison Administration also agreed to allow Sisi to call his family once a month, and to allow the representatives of the detainees, in the prison, to visit him at any given time.

Fuad Al-Khoffash, head of the Ahrar Center, stated that Sisi ended his trike once he was removed from his cell, and added that the Prison Administration also removed eight detainees from their solitary confinement cells.

The eight detainees were forced into solitary confinement for holding hunger strike in solidarity with Sisi.

Israeli Mossad agents kidnapped engineer Dirar Abu Sisi back in February 2011 in Ukraine when he traveled with his wife, Veronica, to seek citizenship, as his wife is Ukrainian.

Sisi, his wife and their six children left Gaza after Israel’s Cast Lead offensive against Gaza that led to the death of 1419 Palestinians, and thousands of injuries, including dozens of died of their wounds later on; most of the casualties were civilians, including children and infants. Dozens of seriously injured Palestinians died on their injuries. Most of them were children, women and elderly,

On 18 February, he boarded an overnight train from Kharkov to Kiev, hoping to meet his brother Yousef, a resident of the Netherlands, for the first time in 15 years. Nevertheless, he never reached Kiev.

During the night, three men, two of them wearing Ukrainian military uniforms, boarded his compartment, flashed a badge from the Security Service of Ukraine, and demanded he leaves with them. At around 1am, they forced him off the train.

Israeli Agents then flew him out the country, and placed him into solitary confinement; Ukraine has denied any involvement in the abduction of Abu Sisi.
An Israeli court’s gag order and tight security controls prevented neither Abu Sisi nor his attorney from sharing the details of his abduction.

Abu Sisi was handcuffed, hooded and taken by car to a Kiev apartment, where six men introduced themselves as agents of Israel’s Mossad intelligence agency. After interrogating him, they forced him into a coffin, and then flew him to Israel, with one unknown stopover along the way.