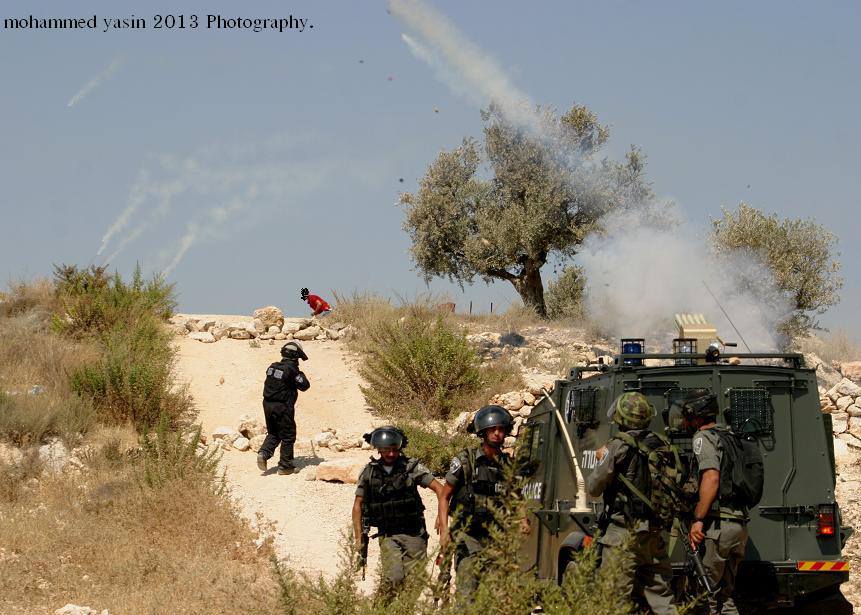 [Friday August 30, 2013] Israeli Soldiers attacked the weekly nonviolent protest against the Annexation Wall and settlements, in Bil’in village, near the central West Bank city of Ramallah, leading to dozens of injuries. Soldiers attacked reporters and detained an international journalist.Dozens of residents, local political leaders, Israeli and international peace activists participated in the protest.

This week’s protest comes in solidarity with the Palestinian detainees, held by Israel, and facing ongoing abuse and violations.

Carrying Palestinian flags and signs, the protesters marched through the village chanting for national unity, liberation and the freedom of all detainees.

Local sources said that the soldiers fired rubber-coated metal bullets, concussion grenades and gas bombs as soon as local, Israeli and international, nonviolent protesters arrived near the Annexation Wall, separating the residents from their lands.

Six Palestinians have been shot by rubber-coated metal bullets, and gas bombs, while dozens have been treated for the effects of teargas inhalation.

The Popular Committee against the Wall and Settlements stressed on the importance of national unity and steadfastness against the aggression of the Israeli occupation.

The Committee denounced the killing of three Palestinians who, on Monday at dawn [August 26] were shot by live fire of an Israeli undercover unit that infiltrated into the Qalandia refugee camp, north of Jerusalem. Dozens of residents have been injured.

Dozens of nonviolent protesters suffered the effects of teargas inhalation, and received the needed treatment by local medics, despite the fact that the army tried to disrupt their work.

In related news, the soldiers soldiers used tear gas, chemical water and rubber-coated steel bullets to attack the weekly protest in the nearby village of Ni’lin.

Residents and their international and Israeli supporters, managed to reach the wall.

At the nearby village of al Nabi Saleh, Israeli soldiers attacked the villagers and their supporters before leaving the village.

Dozens of soldiers also stormed the village and fired gas bombs into resident homes. Many were treated for the effects of tear gas inhalation.

In the al Ma’sara village, near Bethlehem, soldiers stopped the villagers and their supporters at village entrance then forced them back using rifle-buts and batons to push people back, no injuries were reported.