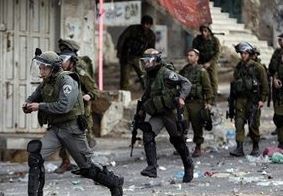 [Tuesday at dawn September 10 2013] Dozens of Israeli soldiers invaded the Al-Arroub Refugee Camp, north of the southern West Bank city of Hebron, violently broke into dozens of homes and searched them, and kidnapped at least 17 Palestinians.Local sources have reported that the soldiers attacked several Palestinians while searching their homes, and distributed leaflets in the camp threatening “harsh consequences should local youths continue to throw stones at the soldiers and settlers in the area”.

Dozens of soldiers also searched lands near the camp, broke into and searched an Internet Coffee Shop, located in front of the camp, and interrogated several residents.

Ahmad Abu Kheiran, Coordinator of the Popular Committee against the Wall and Settlements in refugee camps in the southern part of the West Bank, stated that the army has escalated its invasions into the camp, and that the soldiers kidnaped numerous school and college students during these invasions.

He added that the soldiers, accompanied by Border Guard Policemen, have been harassing the residents, including women and children, on a daily basis, an issue that caused further tension and frequent clashes.